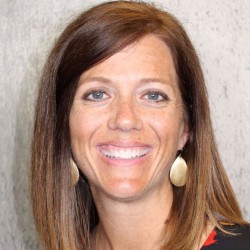 Heather Alberda has been a Sexuality Educator with the Ottawa County Department of Public Health for the past 15 years. She received her BA in Criminal Justice from Grand Valley State University and recently completed the University of Michigan Sexual Health Certificate Program. Heather received her AASECT certification as a sexuality educator in 2014. She is one of five certified sexuality educators in Michigan. Her passion for the community, youth and sexual health has taken on many facets throughout the years.

She began her career teaching prenatal classes and coordinating a peer education program entitled Mothers Know Best. Her focus over the years has included STI/teen pregnancy prevention, providing parents with the power and information to encourage healthy sexual conversations as well as chairing the local sexual health coalition. Heather’s passion lies within empowering youth and encouraging them to seek correct information about sexuality.

In 2007, Heather attended a Sex and Technology conference in San Francisco which sparked her passion of reaching youth and promoting healthy sexuality through technology. Out of this passion grew piloted efforts on MySpace, Twitter, Facebook, and other texting initiatives, a Photo Voice Project that gave voice to local pregnant and parenting teens, the launch of Wear One a condom distribution campaign and most recently has piloted in school STI testing. This past summer MDHHS awarded the OCDPH grant monies to collaborate with organizations who serve farmworkers in Allegan/Ottawa County to implement sexual health education and STI testing/treatment within the migrant communities.

She is also a current member of the American Association of Sexuality Educators, Counselors, and Therapists. Locally, Heather is a member of GLC-SOPHE (Great Lakes Chapter). There she has held the positions of President, Past President, Secretary and National Delegate. She is also a member of the executive board and serves as the secretary for the Michigan Organization on Adolescent Sexual Health. She also has a long standing relationship with many of the local school districts as part of their Sexual Education Advisory Boards (SEAB) assisting with data, curricula, community resources, presentations and advocating for comprehensive education.

In 2014 Heather had the honor of receiving the Roy R. Manty Distinguished Service Award from the Michigan Association for Local Public Health recognizing her for her efforts in the field of sexual health.

In the winter of 2016 Heather was also honored with a Preceptor of the Year Award given through the Masters in Public Health School at Grand Valley State University recognizing her work for igniting passion and inspiring young professionals.

In August 2017 Heather was recognized for her work in expanding Wear One (a condom distribution program) at the MI State STD Conference with an Outstanding Innovations Award. Wear One now covers 46 counties in MI, including the U. P and 3 college campuses…providing access to more than 42% of Michigan’s population. She has written for Juicebox, a sexual health app and was recently featured in Bustle highlighting STI testing, The Atlantic speaking about the 20th Anniversary of “The Care and Keeping of You” and in West Michigan Woman adding to the conversation on #metoo.

No courses found for Heather C. Alberda in the Winter 2023 term.