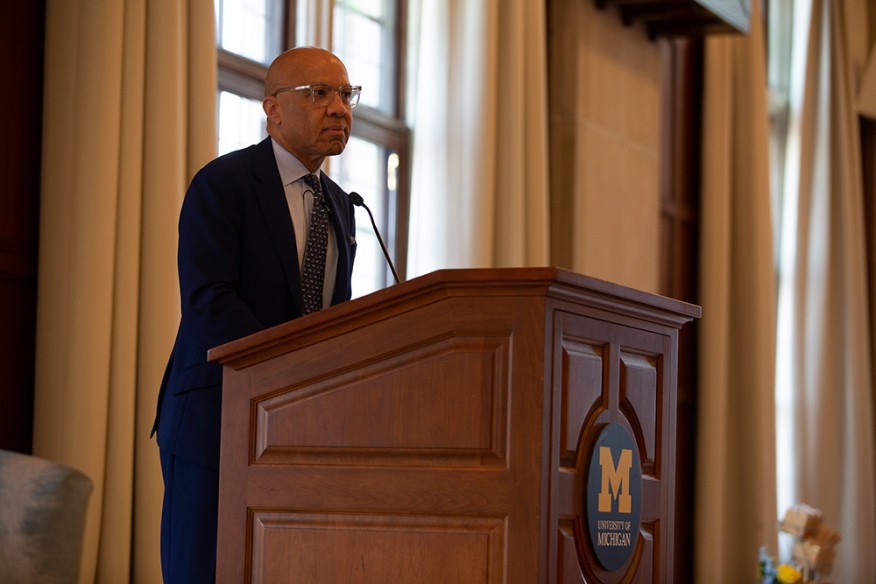 In September of 2022, the School of Social Work presented Darren Walker, president of the Ford Foundation, in the School’s second annual Social Justice Changemaker Lecture. The program, “Social Change in Action: How to be a change agent in a world that feels out of control,” drew both an in-person and livestreamed audience from Michigan Union’s Rogel Ballroom. In conversation with School of Social Work Dean Beth Angell, Walker explored ways to be a change agent during challenging times and how to use philanthropy as a force for social change.

Born in a charity hospital in Louisiana, Walker was raised by his single mother in East Texas and in 1965 was part of the first preschool class of Head Start. He received his bachelor’s and law degrees from the University of Texas. He began his career as an investment banker on Wall Street before becoming chief operating officer of the Abyssinian Development Corporation, which led the efforts to revitalize Harlem in the 1990s. He brought all of this experience to philanthropy, first at the Rockefeller Foundation, then at Ford, where he’s been president since 2013.

“In philanthropy, we’re in the business of hope,” Walker says. “Hope is the oxygen in society. We should be builders of hope. We should be investing in the things that help create more hope. And one pathway to more hope is more justice. They are inextricably linked.

“Philanthropy was created from systems of injustice,” he told his audience during the moderated conversation with School of Social Work Dean Beth Angell. “We have to investigate our own complicity. We have to hold the mirror up to ourselves. Privilege buys you the right not to have to do that. For real change, we in philanthropy must commit ourselves to justice and social progress. We are far from doing that as well as we would like to.”

Walker called capitalism, “the most effective way to organize an economy,” but he had a caveat: “The kinds of capitalism we have today are not producing the shared prosperity we need for people to believe in capitalism. If the bank is calling you about your student loans, you are not going to like capitalism!” While this example certainly resonated with many in the audience, Walker also stressed the importance of the system we have. “Social change requires the three I's...ideas, institutions, and individuals,” he said. “Institutions in a democracy are essential."

Walker revealed himself to be a fan of one institution in particular. In his opening remarks, he took in his audience and the view out the ballroom windows and said, “What a magical place this great university is! This campus is enchanting; everyone here is committed to advancing ideas and engaging in the process of democracy making.” Addressing all those who came to the School of Social Work because of their belief in social justice, Walker said, “The discipline of social work is essential. So much of the pain and grief and anguish over the state of the world and of people's lives rests on the shoulders of social workers. They know you can’t get to justice without empathy.”

The Social Justice Changemaker Lecture series, established by a generous gift from Neil and Annmarie Hawkins, focuses on important global social justice issues including race and nationality, immigration and refugees, income inequality, gender identity and sexual orientation, education, health, and mental and physical abilities. The Lecture aims to bring prominent social justice experts and advocates from multiple disciplines including social sciences, science, humanities, the arts and the professions to the University of Michigan campus.

Photos From the Lecture