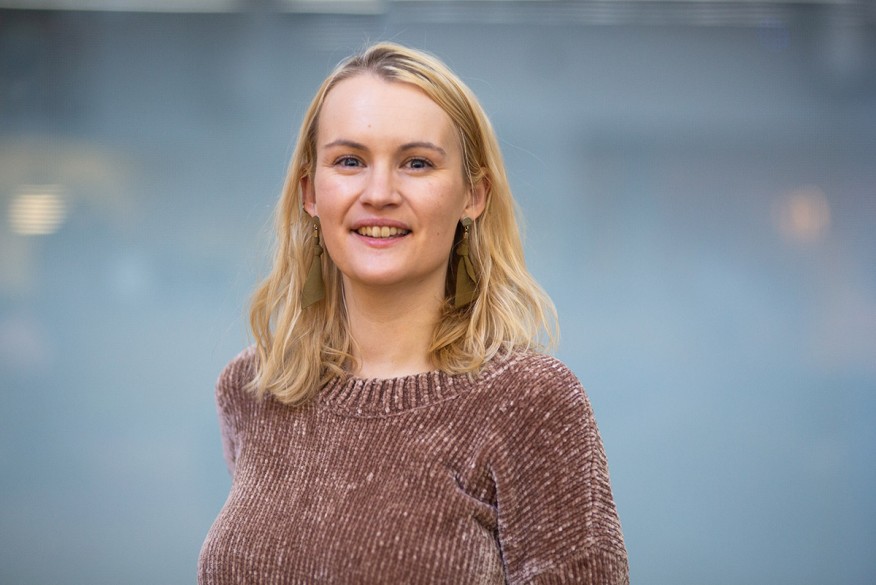 Louise Ashwell grew up an hour south of London, in Farnham, Surrey, and majored in contemporary history at Cambridge, graduating in 2014. After graduation, she worked at a domestic abuse support agency. After three years, though, she was eager for a change. Her partner was earning a PhD in Psychology at U-M, so she had visited Ann Arbor and had loved it. “U-M has a great social work program with a great reputation,” Ashwell says. “A lot of our faculty do work in the area of domestic abuse — particularly Assistant Professor Lisa Fedina, and Professors Rich Tolman and Todd Herrenkohl.”

Ashwell began her MSW in the summer of 2019. She graduated and has begun 16 months of Optional Practical Training (OPT), a visa extension that allows for work experience in the field in which an international student has just earned their degree. (Ashwell does not have the traditional F1 visa, but a J1, issued to students in educational exchange programs: Ashwell has a Fulbright scholarship.)

Ashwell was one of ten in her class to receive funding from the school’s Community-Based Initiative (CBI) in Detroit, for students doing leadership and community work in that city.  CBI participation includes classes in Detroit and field placements. Ashwell was placed at the International Institute of Metropolitan Detroit, which serves low-income foreign and native populations. The institute is an immigration clinic for those seeking American citizenship. Ashwell worked on grant applications, events, programming for English classes and clients’ applications to U.S. Citizenship and Immigration Services.

Today, Ashwell is working on research and project management for the School of Social Work, the School of Nursing and the School of Information. The largest share of her time is spent at the School of Nursing, where she is the study coordinator on a Centers for Disease Control-funded trial of an online sexual assault resistance training program with undergraduate women. At he School of Social Work, she works with Fedina as the data manager for a federally funded grant via the National Institute of Justice, exploring the prevalence and correlates of sexual assault on campus. “We have a huge dataset of student responses to a survey about sexual assault,” Ashwell explains, “and we're looking at how demographics and the features of different college campuses inform sexual assault prevalence, types of victimization, beliefs about sexual assault, and so on.” Finally, at the School of Information, Ashwell is working with Associate Professor Sarita Schoenebeck, analyzing responses to a survey, conducted in 14 countries, about online harassment via social media.

Ashwell will return to the U.K. next spring. She wants to use her MSW to do community based work in the U.K., but she says that “I see myself pursuing research and evaluation of outcomes in community-based settings, rather than academia,” Ashwell says. “I would love to work with U.K. nonprofits or in local government. Domestic abuse prevention work is needed more and more in the U.K., and there is  a demand for social workers to provide evidence-based practices, backed up by data.” Working for a domestic abuse support agency got Ashwell interested in research and evaluation. “I did not feel that we were as reflective as we might have been,” she says today. “We were delivering services in a superficial way, not looking in depth at what we were doing and the impact. I knew there had to be more systematic, meaningful ways of measuring our performance. I am very excited to explore it further.”