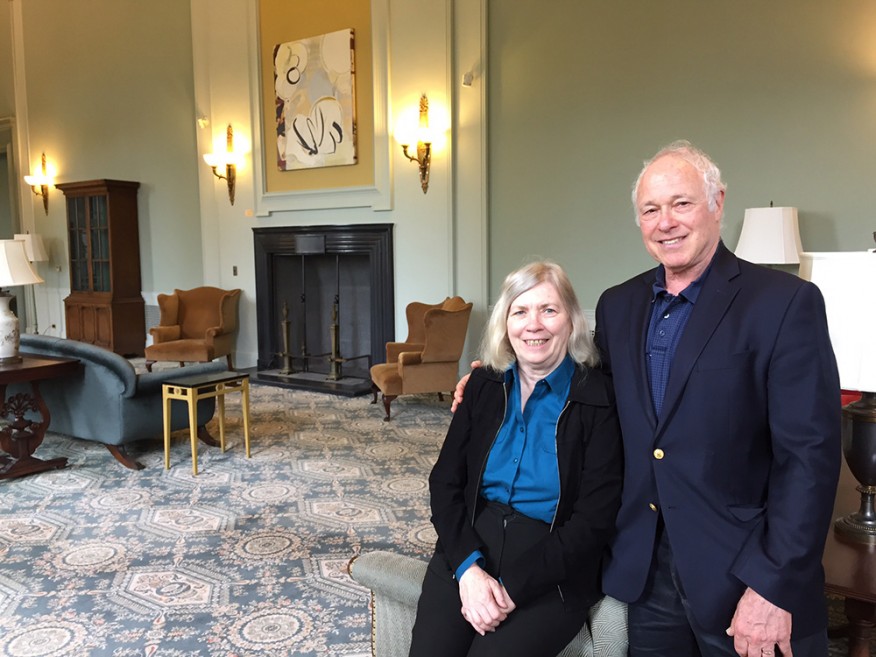 Grateful to Alumni Paying it Forward with Endowed Scholarship Fund

Students at the U-M School of Social Work will soon benefit from the generosity of alumni Judson (Jud)  and Lynne Morris. The Morrises are establishing an endowed scholarship fund for MSW students interested in community organization with a preference for students from three Midwestern cities that have special meaning for the Morrises. Jud (MSW ’71) and Lynne (MSW ‘69, PhD ‘76)  recently spoke to Ongoing from their home in Gig Harbor, Washington (just across the Narrows from Tacoma) and shared their story about their careers, their student experiences, , their dedication to community organization, and special motivations they have for supporting U-M social work students.

Jud: I was inspired to establish this scholarship by the impact that the U-M School of Social Work had for Lynne and for me. The three most important things in my life have been marrying Lynne; becoming a parent; and earning my MSW from the University of Michigan. The degree was not only helpful for my career, but the experience was much greater. I’m thinking of how much I learned and how much I incorporated the philosophy of the School of Social Work in my day to day work. I wanted to give back to the School, to support the School’s future and to support the philosophy and mission of social workers in the field.

Jud: For me, it goes back to my childhood, seeing inequalities as I was growing up in Chicago. Lynne and I came of age during the civil rights and antiwar movements. At Michigan, we were among 20,000 people, mostly students, who convened at the Michigan Stadium on October 15, 1969 to protest the Vietnam war. The power of seeing that many people focused on social change was inspiring.

Lynne: We have also specified that scholarship recipients come from one of three major urban areas that resonate with us. My parents both grew up in Cleveland, and Jud worked in Detroit. And we met in Chicago! In Chicago, I worked for the American Bar Association studying the impact of lawyers in the juvenile court system, and Jud worked for the Cook County Department of Public Assistance. We have relatives in Chicago and Cleveland, and Jud worked for the Neighborhood Service Association in Detroit, which had a strong community development focus. I also have a Chicago relative, Ellen Gates Starr, who cofounded Hull House with Jane Addams and organized for women’s rights.

Jud: Here’s another inspiration. Now, Lynne and I got through two years at the U-M School of Social Work for less than $1,300 each—that’s for four semesters! Lynne had a small stipend, and I worked for Professor Charles Garvin, but we didn’t have any loans. We graduated and launched our careers without debt. Students today have the same drive to be in social work and promote dignity and change that we had, but they can’t afford it!” We want to be there for students who want to go into our field, and we want to support continued excellence at the U-M School of Social Work.

Lynne: Schools like U-M must attract a diverse group of students. I got a lot from the faculty at the School of Social Work, but I also got so much from meeting and interacting with fellow students. So it’s important to maintain the quality of the student body, and the School can’t do that without donor support, especially in the face of diminishing state support.

Over the years we have spoken with U-M graduates from many units. I have never met anyone who didn’t praise their education at Michigan. They all say it is life-changing. They talk about the importance and quality of that educational experience. It’s hard to think of a better investment to make than to ensure that the University continues to provide that level of opportunity and that access is available to a wide range of students who can grow through that experience.

Jud and I have also had the opportunity on several occasions to meet Dean Lynn Videka, and we are very pleased to see how much she’s embraced the traditions and mission of the School of Social Work and how she will continue to provide strong leadership to maintain excellence.

Jud: I took in by osmosis, almost at the DNA level, the Michigan fight song about being the “leaders and best”. We really support that philosophy. One of the major reasons that we are giving this scholarship is that we want to continue the excellence of Michigan, to prepare students, to be the leaders and best into the future.