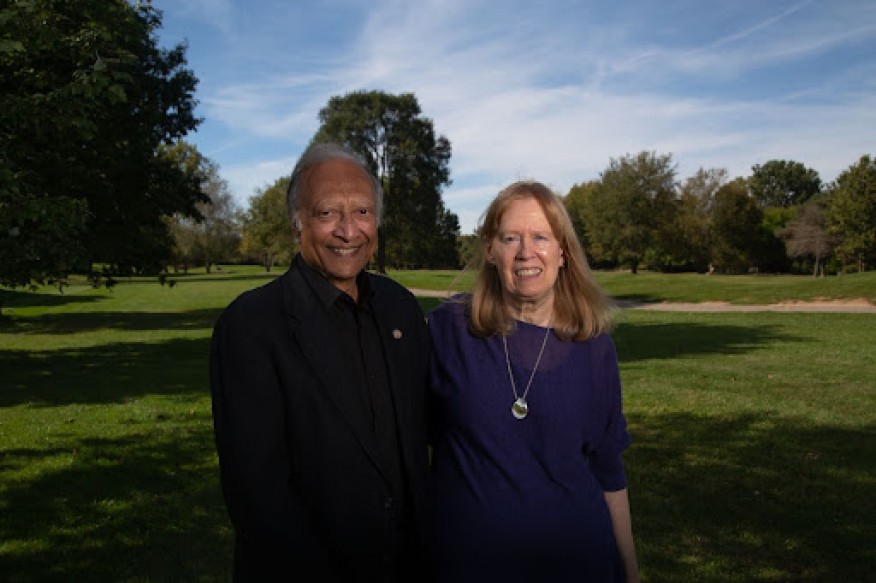 Many of our international students — as well as our Detroit-area students, especially those who work with Black and Latinx populations — have benefited greatly over the years from the scholarships established by Kristine Siefert, MSW ’75, Edith S. Gomberg Collegiate Professor Emerita of Social Work, and her husband, Kalyan Dutta, MBA ’78. Together, Siefert and Dutta have established the Kristine Siefert and Kalyan Dutta Endowed Scholarship, as well as the Geeta Dutta Memorial Scholarship, in honor of Kal Dutta’s mother.

Kris Siefert has a long history at Michigan. She, her father, her sister and her nephew are all graduates. “I was born right here, when my dad was a graduate student in architecture,” she says. “Later, I graduated from U-M with a degree in English. My first job was in volunteer services at St. Joseph Mercy Hospital. I became interested in medical social work, so I went back to U-M for my MSW. In my field work, I saw tremendous health care disparities that led me to formalize my interest in public health.” Off she went to the University of Minnesota for a joint MPH/PhD in social work and public health. She then returned to U-M and served on the faculty of the School of Social Work for 33 years, teaching in the MSW and PhD programs and holding many administrative positions throughout her career.

Siefert’s research focused on health disparities. She studied inequities in African American and white birth outcomes, and was interested in food insecurity and in other modifiable risk factors for poor health outcomes. She was funded by the federal government, including NIH, served on various advisory and review committees, and collaborated on research with U-M units other than the School of Social Work, including the Medical School and School of Public Health. “I am very grateful to the university for the support I received throughout my career,” she says. One of Siefert’s most rewarding assignments has been here at the School of Social Work, on the Dean’s Advisory Board. “I have worked with five different deans. I have especially enjoyed working with Lynn Videka. She has led the school well and she has hired excellent faculty.”

Kalyan Dutta followed a different path. He came to Ann Arbor from India as a graduate student in computer engineering. He was only allowed to bring $50 in cash with him. “That’s all I had when I landed on State Street,” he says, “Given the role that financial aid played in my life, I feel obligated to give back as much as possible.” He eventually received an MBA and spent his career at Ford Motor Company, retiring from there as manager of Global Product Development Process.

The Siefert and Dutta scholarships support students who are residents of the Detroit area — with a preference for those working with Black and Latinx populations — as well as international students. Seifert explains how her interest in metro Detroit students comes straight from classroom experience. “Many Detroit students contributed so much to my classes,” she says. “I was impressed with how much juggling they did. Some students had kids at home, they were working and going to school, and still they were so tremendously committed to making a difference. As for international students, they contributed an invaluable perspective that enriched my classes. I am so grateful for the wonderful students. Endowed scholarships were a way to make sure that the support would continue into the future.”

The Geeta Dutta Memorial Scholarship came about in a different way. Kal Dutta’s mother had a small inheritance, with which she funded her son’s early education. But, Dutta says, she had another remarkable skill. “She ended up with a few hundred left over,” he says, “and she invested it in the stock market. After she passed away, when I looked into her portfolio, I was amazed at the wealth she had accumulated! We thought it was totally appropriate that we should invest her money in a scholarship fund. Education was so important to her.” Dutta points out that there is a long history of people honoring mothers at the university, and he cites two residences named for alumnae mothers — Martha Cook and Helen Newberry. “More donors need to step forward and honor their parents.” Dutta says.

Siefert explains how the couple’s giving evolved. “When we were first married,” she says, “we donated modest amounts. As time went on, we gave more and then decided to document a bequest because it seemed like a way to invest in the future. We always planned to leave part of our estate to U-M and we thought we should formalize it.”

Discussing his wife’s varied career and influence, Dutta jokes that “I am not as illustrious as Kris.” Of his career at Ford he says, “I kept my head low and was a good capitalist!” But there was a strain of social work in Kal Dutta’s career, too. Early on, when he became a supervisor, he noticed that women engineers were not being invited to join teams or be promoted. Management was all male, and they only promoted those who looked like them. So he actively recruited women. “The day before I retired,” he recalls, “I found out that I had been given Ford’s first Global Diversity Award. It was a proud moment for me.”

A decision to make a gift may honor the past, but, as Siefert says, “student support is investing in the future. Kal and I focus on students making a difference in an area we care about. People don’t go into social work for the money. They want to do something good. So you want to put your money on someone who believes in something. It is wonderful to help students accomplish their goals by removing financial barriers. Then they can focus on school and not worry about finances.” Dutta adds, “We always ask ourselves, what has the biggest leverage? As I myself well know, student aid flows directly into student pockets, and it makes all the difference in the world.”