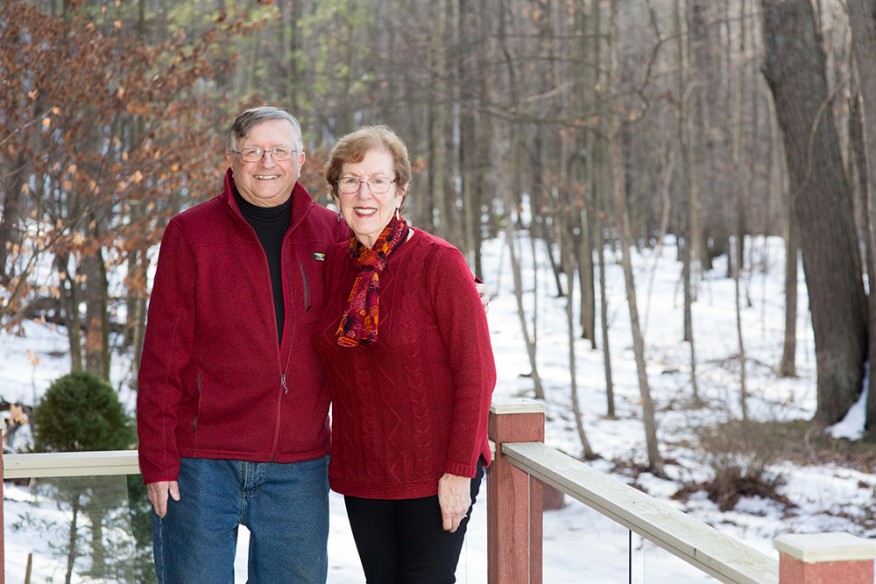 John Tropman came to the U-M School of Social Work in 1965, as a PhD student in Social Work and Sociology. He stayed on as a professor, teaching and researching on such topics as entrepreneurship, social policy, nonprofit board  and decision-making systems. Today, he co-chairs the committee that is organizing events for the School’s centennial in 2021. John’s wife, Penny Savino Tropman, worked for U-M’s Counseling and Psychological Services for many years and also taught at the School of Social Work.

Recently, the couple established the John and Penny Tropman Conference Networking Travel Grant for students in the School’s joint PhD program, and a scholarship for MSW students with an interest in nonprofit management, naming the Tropman Family Seminar Room, Room 2773 on the SSW building’s  second floor. In addition to Penny and John, the seminar room also honors John’s father, Elmer Tropman, a prominent social worker and United Way leader in Pittsburgh, and his brother, Peter, a social worker and former member of the Wisconsin State Assembly.

Ongoing recently caught up with the Tropmans at their home in Ann Arbor overlooking the Huron River. We went to ask about their two major gifts to the School, but most often the Tropmans ended up being each other’s best interlocutors.

ONGOING: What motivated the two of you to set up the John and Penny Tropman Conference Networking Travel Grant?

Penny Tropman: We both come from families without a lot of means. I would not have been able to go to college at all had I not gotten a scholarship to the College of St. Catherine in St. Paul [now St. Catherine University - ed.]. It made a huge difference in my life. So now we are paying it forward.

John Tropman: I have had a good career at the University of Michigan, and so has Penny. It seemed appropriate to chip in, to invest and maintain the School’s cachet and value. Being number one is significant for many students.

Penny: We’ve both had students over the years who came from humble beginnings. Going to the number one school of social work delighted them and their families, so we want to see the School maintain its reputation. You can’t do that without some bucks to maintain resources and technology, facilities, staff, all of that.

ONGOING: Why a grant for “conference networking” in particular?

Penny: We know the importance of conferences in building a career. John was in the joint doctoral program here at the School of Social Work, but he couldn’t afford to go to conferences unless they were nearby. So giving in that area seemed like a good idea.

John: The School did help students if they were giving papers. Now papers are all well and good, but you get a lot from going and networking. Networking is as important as presenting. That’s why it is a “Conference Networking Travel Grant.” It’s for occasions on which students are not presenting but still wish to attend a conference to network.

ONGOING: Tell us about the gift of the Tropman Family Seminar Room.

John: We wanted do something that had some significance. A seminar room reflects an exchange of ideas, which was very important, and it includes faculty, staff, and students.

ONGOING: We hold Ongoing meetings there!

John: Exactly! The room is not just for one of those groups. It is an omnibus facility. We also wanted to recognize other members of our family, including my dad, my brother, and Penny. And we have a little bit of memorabilia, including two pictures by the American photographer Mickey Pallas, representing the Pittsburgh steel industry. My dad played a role in the Pittsburgh renaissance. Pittsburgh was in terrible shape in those days. The Point was full of—

John: But the different ethnic groups, as well as labor and business, were able to work together thanks to a lot of effort by people behind the scenes.

John: He was well known in town for bringing diverse groups together. And, so I thought that a seminar room, a convening place, would be an appropriate emblem of that.

ONGOING: Penny, you came from a similar background, didn’t you, in terms of ideals?

Penny: We both came from families that emphasized social justice. My family lived in a working class neighborhood in St. Paul, and a black family moved in across from our house. I played with their little daughter; we were the same age. Then a woman came to our door with a petition to get them out of the neighborhood. My mother—who is an Irish hothead!—actually pushed her off the stoop and said she was no kind of Christian and had better not darken our door again! We also grew up worshipping Franklin Delano Roosevelt. We had pictures on the wall of the Sacred Heart and FDR!

ONGOING: John, you are serving as a co-chair of the School’s Centennial Planning Committee. I imagine you see a connection between your family’s gifts and the centennial celebration.

John: The general idea was that our gifts would help jump-start the Centennial celebration. We would like to see faculty and staff participation in centennial giving, regardless of the amount.

Penny: The centennial is very exciting. I hope it will establish a real tradition of giving. Social workers are not the richest people in the world—we certainly were not—but most people could afford a few dollars a year. The school trains people to provide social justice. If they don’t get that training, folks aren’t going to be served.

John: As part of the centennial, we’re trying to improve things we’re already doing and introduce new things. For our giving, Penny and I have some principles, one of which is, if we start something, we wanted it to continue, like a scholarship.

Penny: Since we started the Tropman Travel Grant, we have gotten so many letters of thanks from students. They bring tears to my eyes. It seems to us like a little bit, but from their perspective, we have made a huge difference.

John: We have made the difference.

Penny: The expression of gratitude is very moving, but we don’t expect it. We simply like giving. To be able to give is a gift in itself.