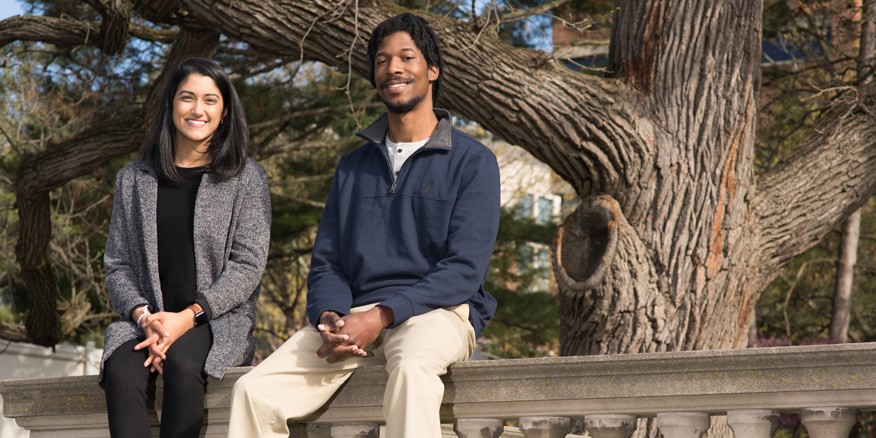 In Creating Youth Empowerment Groups, Two MSW Students Develop Skills of their Own

MSW students Kashmin Dalal and Keyshawn McMiller have created a new online youth group designed to help high school students develop connections, life skills and resiliency. The project grew out of Dalal’s field placement at Southfield Mental Health Associates. “We were given the task of engaging the community. I wanted to do that in a way that I felt passionate about, and that has to do with kids.” Dalal made a connection with Pat Wiley at Inform Yourself Youth Development Company, and together they brainstormed ideas. “Being new to Michigan, I didn’t really know anything about the demographic or the needs of Southfield, while Miss Pat Wiley has been living in Southfield for the last 25 years.”

Dalal emailed fellow intern Keyshawn McMiller, whose academic interests also focus on youth, teens and tweens. “The idea really resonated with me and we ended up collaborating on these empowerment groups.” McMiller created a logic model based on the framework he learned in his Evaluation in Social Work course. “It’s how we organized the group, so it was just really cool to use this skill for a project and have it actually manifest into reality.”

Clinical Assistant Professor Daicia Price is the field instructor for both students. “The field unit at Southfield Mental Health was created to allow students the opportunity to be a part of an interprofessional team,” she said. “ Kashmin and Keyshawn have been able to intentionally incorporate their coursework into their training program and are a tremendous asset to the clinic and community.”

Organizing the group virtually opened up the geographic potential to high schoolers throughout Michigan. “It’s really tough for teenagers, they’re missing out on so many things, like homecoming, proms and football games,” said McMiller. “One of the more impactful things we heard in our introductory meeting was that many of them signed up because they were looking to meet new people. It really showed us how we were filling a need for this community.”

Dalal and McMiller designed the group to focus on soft skills: helping students develop the skills to think critically, balance mental wellness and handle conflict negotiation. “In developing the program, both of us have talked about how we never had that kind of guidance in high school, and that we both stepped into our individuality and identities a little later than we would have wanted to and, if we’d had something like this group to empower us, we could have developed confidence in ourselves sooner,” explains Dalal. So hopefully we are presenting this group as a place for students to share and develop their voice.”

McMiller adds, “Building this project from scratch has been really eye opening and it's shown just how important it is to effect change on a broader level.”

Beyond the benefits to the youth group members, Dalal and McMiller have also experienced their own growth. “I’ve learned a lot about myself, especially in regards to social work and the groundwork that has to be done. But I’ve also learned that I need someone to help tether me,” reflects Dalal. “I am very much a dreamer and I have such respect for Keyshawn, he’s been the anchor, always saying ‘Okay, what do we have to do to get there?’”

“I have found myself in these situations where I”m called to lead in some capacity,” notes McMiller. “I think Kashmin already mentioned that we were both late bloomers in regards to coming into our purpose and our individuality. So I was wading through the darkness, so to speak, and I really shied away from opportunities to lead. But social workers are collaborators, and collaborating with this team and with Kashmin has shown me that it’s possible for me to change, and to trade who I am for what I can become.”

The Youth Empowerment Group led by Dalal and McMiller are sponsored in partnership with Southfield Youth Assistance and Southfield Mental Health Associates and will continue through the summer.  To learn more, please contact: Kashmin Dalal at kashmindalal3@gmail.com or Keyshawn McMiller at therakeys@gmail.com.