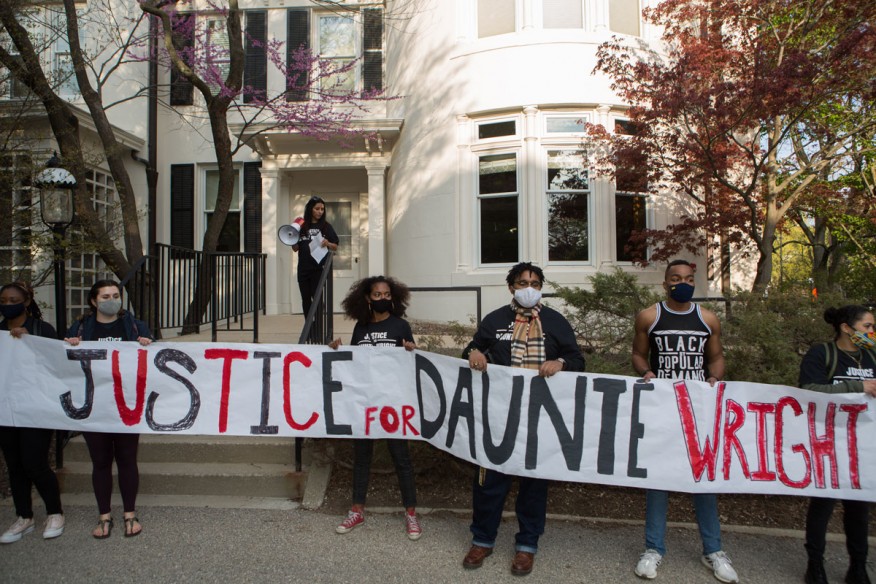 On April 23 at 6 pm on the University of Michigan Diag, School of Social Work students, activists and U-M community members met to protest the death of Duante Wright, and to demand the university and the School of Social Work move from talk to more progresive action in the fight against police brutality. The demands for action included publicly denouncing the murder of Wright; taking initiative to support Black, Indigenous and people of color; calling out white supremacy and investing in alternatives to policing.

Daunte Wright, a 20-year-old Black man, was shot and killed by police during a traffic stop on April 11, in suburban Minneapolis. After meeting at the Diag, the group marched to U-M President Mark Schlissel’s home, the headquarters for U-M’s Division of Public Safety and Security, the Fleming Administration Building and back to the Diag. The group took part in numerous chants as it marched, and people carried signs reading “Am I next?” and “Who do you call when police kill?”

MSW student James Hill IV, an organizer and member of the Association for Black Social Work Students, Black Radical Healing Pathways and the Student Union said, “The protest was in part about police brutality. It is obvious that the murder of Daunte Wright was another incident of the tragic use of police power; however, it has also provided an opportunity for team building and birthing a collective vision of social justice.”

In spite of the pandemic, the protest was well attended and all the participants wore masks. It included students of all colors and from all backgrounds. MSW student Doug Griffiths said he attended because “the murder of Duante Wright demanded a moral response. While the university has created a task force, the real work often gets handed off to individuals that are already overworked,” he said.  “I believe this is a powerful moment in our country and want to inspire and spur both the university and the School of Social Work to help find ways to demilitarize the police and fund research into policing alternatives.”  MSW student Savannah Stanciel echoed these sentiments. “The university and the School of Social Work should set up a scholarship fund for students that have been victims of police brutality, and should fund research into efforts that can solve the problem of living while black in a hostile police environment,” she said.