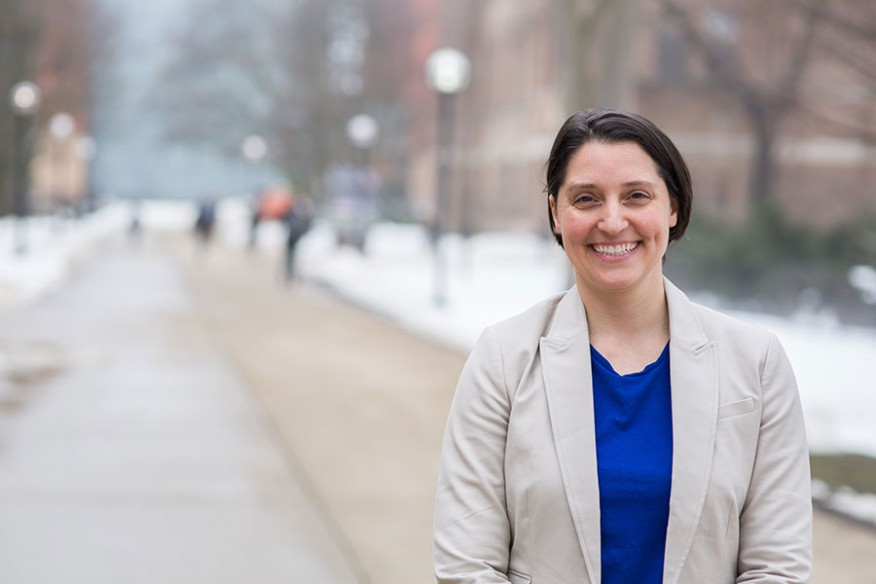 I'm Going to Change the World through Research and Policy Work

For eight years, Angie Perone was committed to social justice as a civil rights attorney. In her last job, at the National Center for Lesbian Rights (NCLR), in San Francisco, CA, she oversaw their national LGBT Elder Law Program. “It was my dream job, and I have immense respect for this organization” she says. “I was fascinated by nontraditional legal ways of addressing social justice issues. But I wanted to learn more. We often relied on social science experts when making unprecedented legal arguments, and I found myself longing to know that world better. I wanted to expand the tools I had to create social change and social justice.”

When Angie learned about the joint doctoral program at the University of Michigan School of Social Work, she thought she might have found her new home. “Interdisciplinary work is critically important for me,” Angie says, “and U-M is known for that. When I visited, I was warmly welcomed by the graduate students and faculty. We had engaging conversations over several days. I felt intellectually stimulated, and it was inspiring to my heart.”

Angie was thrilled to receive the John Longres Award in Psychology or Sociology. “As a recent law grad working for a nonprofit, I had significant debt,” she points out. “I also had a baby, so receiving the scholarship helped offset some of the costs associated with my wonderful but expensive son!” And the scholarship was also significant in another way. “It is quite meaningful to receive an award named after a particular individual,” Angie points out. “I have really been humbled to meet people who know John Longres, who have told me about his life and contributions. It makes the award that much more personal and meaningful.”

Over the past several years, the UM School of Social Work has turned out to be just the right place for Angie. “I have been able to engage in a variety of research projects here,” she reports, “and I have learned a lot about different research methods and am building important networks to develop me as a scholar and as a social justice practitioner.” In addition to her PhD studies, Angie serves as the first executive director of a nonprofit founded in 2015. “I wanted to stay connected with the LGBT older adult communities I had come to cherish in my last job,” she says. So she became deeply involved in the LGBT Older Adult Coalition, which founded SAGE Metro Detroit. SAGE Metro Detroit is a national affiliate of SAGE National, which promotes awareness and change so that LGBT older adults can age with dignity and authenticity. She has found that her doctoral research profoundly shapes her ability to direct the organization and conduct and disseminate cutting-edge research with LGBT older adults. “So many resources are tied to research, so it is critical that LGBT older adults are visible in this work.”

Angie’s research focuses on the reduction of inequities in health care and caregiving. Her dissertation examines  long-term care, and how service providers shape policy when laws are ambiguous or conflicting. She points out that, “service providers, including social workers, make micro, meso, and macro level policy decisions every day and often under very difficult circumstances.” She adds that “competing obligations can create difficult terrain and little guidance for service providers to provide culturally responsive care.” Angie hopes that her research will identify multi-level policy interventions for supporting service providers and caregivers, which can lead to better care for everyone, especially marginalized communities. Angie is also serving a second term on Michigan’s State Advisory Council on Aging where she works with leaders from around the state on policy issues for older adults.

“After finishing my PhD, I would like to continue building research and policy that makes a positive impact in the lives of caregivers and the people who need care, especially in communities that face stark disparities in health and healthcare. I also deeply value the importance of mentorship and look forward to working with students to play a positive role in their education and professional growth.”