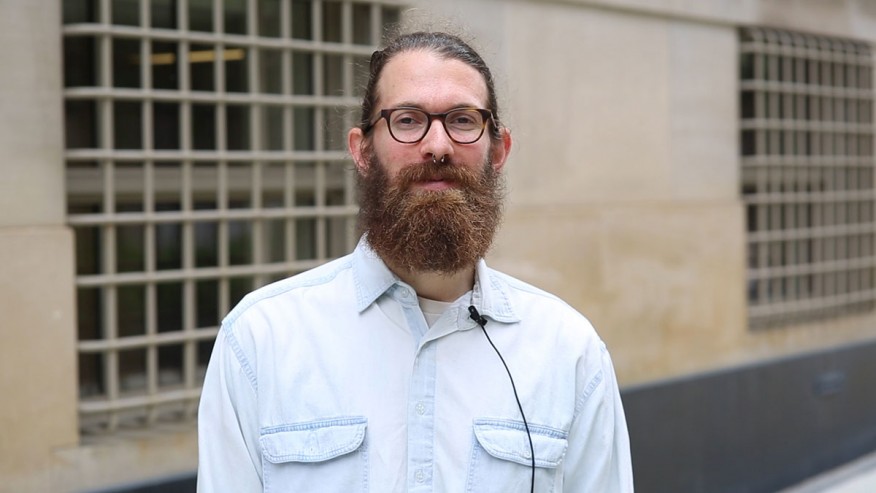 I Want to Change the World by Fighting Oppression

Jacob Ehrlich grew up the child of a Reform Jewish father and a Catholic mother, who felt their children should have a sense of cultural and spiritual identity. So Jacob attended an Orthodox Hebrew school, which, with his mixed religious background, produced in him what he calls, “a mystic reverence toward tradition.” He was good at Hebrew and disapproving of other kids’ sacrilegious antics, so they teased him, saying he would grow up to be a rabbi. Make that a rabbi with a Masters in Social Work, thanks to the University of Michigan School of Social Work’s Jewish Communal Leadership Program (JCLP), and to Jacob’s Rita Specter Gelman and Mervin and Helen S. Pregulman Scholarships.

Jacob says that, “the idea of being a rabbi was brewing in me in secret forever,” but the decision to attend rabbinic school came upon graduation from college, where Jacob was an organizer for the Jewish Student Union. Going directly to rabbinic school felt wrong, though. Instead, Jacob moved to Detroit and got involved with Detroit Jews for Justice, a social justice organization founded by Congregation T’chiyah in Oak Park. In Detroit he also met U-M SSW alumnus Robert Siporin, who, as a U-M student, founded the organization, We Support Detroit Schools.

“I thought about what in southeast Michigan could further me on my path,” Jacob recalls. “Bobby Siporin told me about the JCLP program at the U-M School of Social Work. I knew that getting an MSW in such an environment would allow me to do interdisciplinary work, combining professional training with Jewish studies. It would also help me toward rabbinic leadership and Jewish communal work and feed my interest in pastoral care.

“JCLP program is nearly unique in the field,” Jacob says. “You are part of an intimate cohort of peers, and you have a space for intensive processing and sharing. And while I am concentrating in interpersonal practice, the JCLP program is tailored to macro practice. This satisfies the interdisciplinary element I wanted; it has kept me from falling into the trap of taking just a micro-level approach.”

When Jacob is finally ordained, he thinks his destination may in fact be a college or university campus. “As I rabbi, I want to be a resource for the young vanguard, as they envision and manifest the spaces they want and need. I want people of all identities and backgrounds to be able to come together and feel they make a difference. I am committed to working against oppression but also to analyzing how oppression happens. There is much work to be done and reparations to be made for historical injustices and contemporary inequities.”

As for his Gelman and Pregulman Scholarships, Jacob says, “It wouldn’t be possible for me to be in this program at the School of Social Work without them. I used to be more anti-establishment. I saw my role as marginal in relation to big institutions. But being at the U-M School of Social Work in the JCLP program made me see first-hand how big institutions can be used to advance noble causes and manifest the kind of values I hold. I am very grateful!”