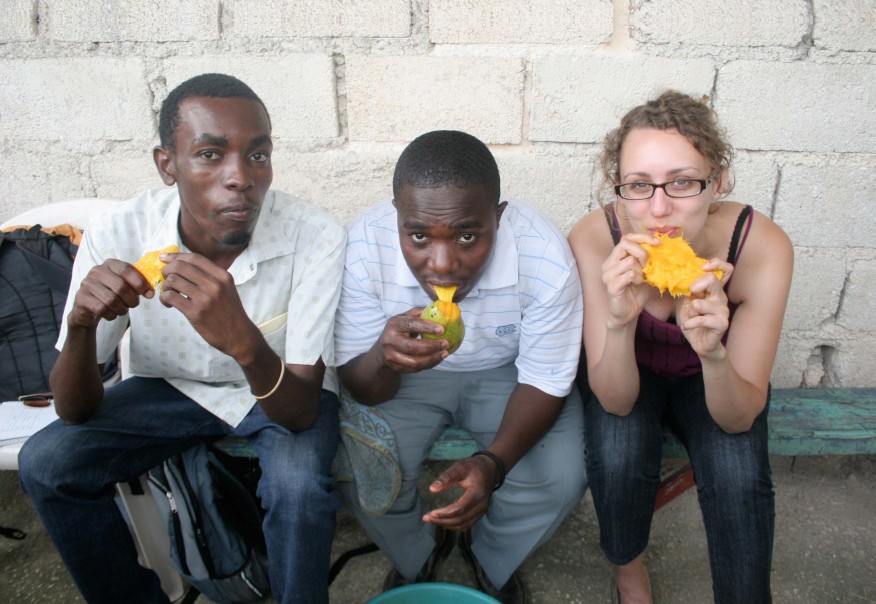 Charity Hoffman, with a group of aspiring social workers in Petionville, Haiti, Summer 2013

Growing up in New York City, Charity Hoffman got excited whenever she saw the University of Michigan “block M” logo. Her great-grandfather, grandfather, and many aunts and uncles attended U-M; there was something about Michigan that always felt like home. After college, Charity took a few years off, and debated between pursuing a PhD and an MSW. She was thrilled when she heard about the U-M School of Social Work’s joint program in Social Work and Sociology, since it would allow her to do both. She was even more thrilled when she was accepted to the program, and she could not be happier with how it has all turned out.

“I wanted the inter-relationship between research and practice that is emphasized here at Michigan,” says Charity, who had majored in Sociology at the City University of New York. “After working for a year with an AmeriCorps program at Covenant House, a shelter that serves homeless and runaway youth, I was debating between pursuing a career in social work or research. Thanks to this program, I didn’t have to choose.”

The connection between research and practice remains important to Charity. For example, last semester, teaching SW 504, she had a Masters student who is also a mother and a doula [a nonmedical person assisting women and families during childbirth]. She invited that student to collaborate with her on her research about the transition to motherhood. Together, they are working on a paper about the challenges facing low-income women when they become parents. Charity says, “My student draws on her experience working with new mothers in Peru, and her own journey as a mother. She is eager to help translate my research into creating resources that can help new moms struggling with postpartum depression. This is what I wanted here—to do research that has direct applications to people’s lives.”

She was helped on her way by the John Longres Award in Sociology. The award was established by Longres, a 1970 U-M graduate who received his PhD in Psychology and Social Work here before going on to teach at the University of Washington. “With the Longres Award,” she says, “I am able to complete my program without taking out loans.”

“The Award has provided me more time and resources to be involved in local communities,” Charity says. “Having lived here in Ann Arbor for almost seven years, I have become invested in many relationships in the broader community. I’ve been able to volunteer in the same social work practice areas I study. My research has to do with women transitioning to motherhood, and I’ve gotten to know young families and single moms and refugees here in Southeast Michigan. I also work with children and families in Haiti, and recently got a grant to help support a parent education program at a malnutrition clinic there. I consider it a privilege to be able to use U-M resources to serve those in need. We hear ‘one million refugees,’ and we get overwhelmed—no one can fix it all. But we can all do small things. Get to know just one family. Tutor one child. It is important to me to forge ongoing relationships and partnerships here in Ann Arbor. I want to stay here after I graduate and continue to foster the relationships I have spend the last seven years building.”

Charity came from a family of stay-at-home moms, so she did not initially imagine an academic career. Once in college, though, she began to think about graduate work. She worked as a nanny off and on throughout high school and college, and she watched women juggle the demands of work and parenting. She saw women who gave up their careers to raise kids struggle to re-enter the workforce when their kids were grown. And she watched mothers of young kids wrestle with dilemmas about work and childcare. Some leave careers to stay home; others continue to work and make barely enough to pay for daycare.

Charity’s PhD dissertation analyzes women’s transition to motherhood. “When I volunteered at a homeless shelter with teen moms,” she says, “I saw the structures that keep them in poverty. That motivated me to study how inequality gets perpetuated. Take parental leave: The U.S. is one of the only countries in the world without a federally mandated parental leave policy. Access to leave is closely tied to women’s occupation type. Professional women have lots of formal and informal support when they have kids. They can often arrange paid time off. Low-wage women frequently lose their jobs during their pregnancies. Their child’s life starts with Mom having no job and no money, trying to find work with a six-week-old baby to care for. Surely we can do better.”