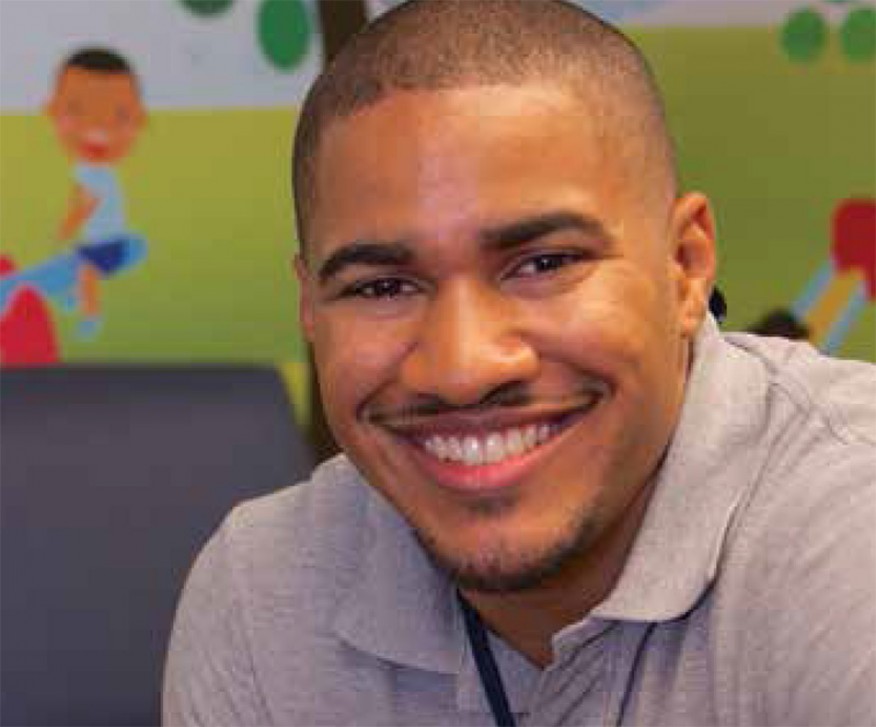 Michael Joiner-Hill, MSW ’14, was named the inaugural recipient of the Carol Goss Leadership Scholarship in December 2013. When he was officially informed of his award, he felt humbled. But more than that, Joiner-Hill says, he was genuinely surprised.

“That someone recognized leadership qualities in me was so surprising, because I’m really a very low-key kind of person,” Joiner-Hill said. “I’ve always liked helping others. To be rewarded for that is something I never would have asked for, but I truly appreciate it.”

In fact, it is his low-key demeanor that helped JoinerHill deal with the inevitable rejections he’s experienced throughout his life. Those rejections, in turn, motivated him to find the determination to take on leadership roles and serve as a calming influence and role model for others facing similar struggles in school, work and life.

The Carol Goss Leadership Scholarship is given annually to one U-M SSW student who is a resident of the Detroit area and who demonstrates leadership potential with a particular interest in community building, civic engagement, education, and leadership development. The recipient must also hold a field placement within the city of Detroit.

Joiner-Hill grew up on Detroit’s west side in a singleparent household. His mother steered him and his five siblings towards volunteerism, athletics and education. He earned a bachelor’s degree in psychology from U-M, and earned his MSW in December 2014. His one-year field placement was with the Children’s Center in Detroit’s midtown.

“The Carol Goss Leadership Scholarship afforded me tremendous opportunity to enrich my development as a future social worker and community leader far beyond what I was learning in the classroom at U-M,” Joiner-Hill said. “You just can’t put a price on that.”

At The Children’s Center, Joiner-Hill was part of a team working with clients between the ages of 4 and 18 years old who presented a wide range of mental and behavioral health needs such as depression, bi-polar disorder and autism spectrum disorders. His work at the center also was aimed at helping family members gain a deeper understanding of their child’s disorder and develop more effective coping skills for daily living, both at home and in the community. He says it was gratifying to work with other professionals who share his passion for serving an underrepresented population.

“At The Children’s Center, I learned that being a good leader means being flexible and open to communication, especially in moments of stress and confusion,” JoinerHill said. “You have to let go of your pride so that you can more effectively help and serve the people who are trusting you to do so.”

Tonya Allen, MSW ’96, president and CEO of the Skillman Foundation of Detroit, is responsible for the creation of the Carol Goss Leadership Scholarship to honor Carol Goss upon her retirement and celebrate her legacy at the Foundation.

Allen said she loves leadership development programs for students and adults, because it’s possible to see the transformation of people as they learn to own their personal power.

Students who want to make a difference in the city are the inspiration for the creation of the U-M scholarship.

“I thought the leadership scholarship was important,” Allen said, “and I want to invest in someone who views him or herself as a change agent and wants to contribute to the growth and prosperity of a city in the same vein and legacy of Carol Goss.”

Joiner-Hill does indeed view himself as a change agent, and he intends to return to the city of Detroit to share his story… and with it a message of hope.

“When I was growing up, we didn’t have money, but being disadvantaged does not have to be a deterrent to achieving your dreams. The message I want to bring back to the people in Detroit is that no matter what their background, they can change the fortune of this city. That’s something Detroiters just don’t hear enough.”

In the future, Joiner-Hill wants to help eradicate the stigma that has long been associated with seeking help for mental health issues. He says the need for more accessible, compassionate mental health care in Detroit is one of the reasons that he hopes to one day open a private clinical practice within the city where he grew up.

“I can relate to the people in Detroit because it’s my home, and I’ve faced many of the same barriers,” Joiner-Hill said. “I envision a practice where community members can come knowing they’ll receive consistent, high-quality care with the empathy and acceptance that they need and deserve.”

The Carol Goss Leadership Scholarship was established by the Skillman Foundation of Detroit to honor U-M School of Social Work alumnae Carol Goss’, MSW ’72, long and storied career as an advocate for children. Goss was president and CEO of Skillman from 2004 until her retirement in December 2013.

Incorporated in 1960 by Rose Skillman, the Foundation is a grant-making charitable organization dedicated to providing resources to improve the lives of metropolitan Detroit children by improving their homes, schools and neighborhoods.

Goss’ tenure at Skillman was defined by her shepherding of the Foundation from that of a traditional, responsive organization to a visionary, proactive one that took on the toughest issues facing Detroit children while mobilizing stakeholders throughout the city. One example of Goss’ leadership was the establishment of “Excellent Schools Detroit,” a 10-year plan to provide an excellent education to every Detroit child by 2020, no matter where they go to school. Goss’ goal is to see that 90 percent of all high school students graduate; 90 percent go on to college or post-secondary programs; and 90 percent of those graduates do so on the strength of their classroom education, without the need for special teaching methods or additional support.

Goss grew up in Detroit and attended U-M for undergraduate and graduate studies, earning her MSW in 1972. Between degrees, Goss worked for a year as a caseworker at the City of Detroit’s Department of Public Welfare, focusing on children and youth living in communities damaged by poverty, racism, and crime. Later in her social work career, Goss was handpicked by the W.K. Kellogg Foundation to lead an innovative youth development program targeting one Detroit neighborhood. She joined the Skillman Foundation as a senior program director in 1998.