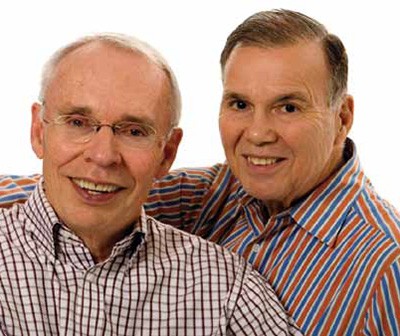 While in his second year of the MSW at the University of California, Los Angeles, John Longres, PhD ’70 had a marvelous brush with good fortune as a game show contestant on the 1960s hit, “You Don’t Say.” Not only did he have a chance to team up with Betty White and other celebrities, but he won five matches and enough prize money for a car.

I went to Michigan during a very heady time…. I have a great love of that time in my life.

“I tootled off in my brand new Ford Mustang to begin my PhD program at the University of Michigan,” Longres said.

Longres is quick to explain that U-M was a major experience in his life, and considered himself quite fortunate to attend the no longer available social psychology doctoral program through the School of Social Work.

For a moment in their history, the departments of Psychology and Sociology organized a unique Social Psychology program, and he was thrilled to be part of it.

“I went to Michigan during a very heady time,” Longres explained. “I’m a native New Yorker and discovered the meaning of my own ethnicity: my father was Cuban and my mother was Puerto Rican. My doctoral program helped me tune in to issues of my own social class, race and ethnicity, and it helped me come to grips with so many parts of my life.”

He even met his life partner of nearly 30 years in the Rackham reading room.

“We were both academic nerds… we were both good teachers and actively did research and published, we also took breaks from academia… and we traveled the world,” Longres smiled. “Sadly, he died in 1995, but I have a great love of that time in my life.”

It was that training and that background from University of Michigan that put me on my successful academic path.

During his studies at U-M, Longres worked at St. Joseph Hospital where he worked with suicidal patients, which had a direct influence on the mental health issues central to his career. He also had an opportunity to collect data in Puerto Rico, which evolved into his dissertation.

“I never really thought of myself as a teacher of social work practice, but I loved all the emphasis on the social sciences and sociology,” Longres said. “I’ve had a wonderful academic career.”

“It was that training and that background from U-M that put me on my successful academic path.”

Longres remembers that his UCLA advisor encouraged him to enroll in the joint doctoral program, but admits a scholarship also played a part in coming to U-M.

“It’s incredibly difficult to go to school today and avoid debt,” Longres said. “I’ve never forgotten how grateful I was for that financial assistance, and giving back to the school that gave me so much is a logical step.”

Longres recently created an endowed scholarship fund to provide support for U-M SSW doctoral students in a joint program with psychology or sociology whose research focuses on social psychological issues as they relate to social work practice with individuals, families, groups, communities, organizations or policy.

“The Joint Doctoral Program greatly appreciates the commitment of dedicated alumni who give back to the Joint Program,” said Berit Ingersoll-Dayton, director of the Joint PhD Program and professor of social work. “This generous gift from John Longres will allow us to support the work of doctoral students who are making important connections between social psychology and the practice of social work.”

Since leaving the academic track, Longres considers himself successfully retired and even wonders how he had time to work. He completed a horticulture certificate and has a keen interest in landscape design and native northwest plants. He lovingly tends his own gardens and draws on the teacher within as a docent in Seattle’s Dunn Garden. Longres also is active in track and field events and has won several gold and silver medals at various Gay Games, including Sydney, Chicago and Cologne in 2010.

This summer, Longres will be married on his 76th birthday.

“I have had an incredible life, and it’s so important to give back and celebrate this happiness!”