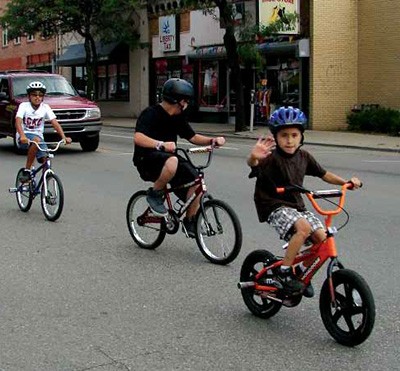 Aaron Surma, MSW ’11, worked in Detroit as a public accountant for five years, but Surma was looking for something more, and he found exactly that at the University of Michigan with his MSW program.

“I didn’t want to be a therapist, but wanted the option of administrative social work,” Surma said. “Once I learned about the U-M SSW management track and Community Based Initiative (CBI) programming, I was hooked.”

Since graduating with my MSW, I look for world-expanding people, and that’s what I found with Professor Gant.

After 18 short months and a lot of dedicated effort, Surma not only found a new career with the National Council for Behavioral Health advocating for integrated healthcare, he discovered volunteer work that he can’t stop talking about.

Surma gives a grateful nod to Professor Larry Gant who taught a CBI class in Detroit, which combined classroom and field work. Surma’s field work led him to the Urban Neighborhood Initiatives (UNI) bike club, a 501(c)3 organization based in southwest Detroit.

“I’m happy to be in Detroit,” Surma said. “I grew up in the area and my family is here, so why not share my social work knowledge with people who are so committed to their neighborhood?”

Five years ago, UNI, a neighborhood improvement organization in southwest Detroit, started a summer bike club based out of a garage attached to the All Saints Neighborhood Center. The goal was to teach neighborhood kids how to repair bikes and ride safely. The next couple of years saw the establishment of a curriculum with more than 20 6- to 18- year olds, the creation of a sweat-equity-based earna-bike program, and newly formed relationships with The Hub and The Wheelhouse, both major bike institutions in Detroit.

“Kids were meeting twice a week to learn about bike safety and repair…they were willingly wearing bike helmets, and they were into it,” Surma said. “We even had some kids who left their football team, to take on a bike-repair apprenticeship with the group!”

It wasn’t long before the word got out about the program, and neighborhood people started showing up to the bike club asking for help with basic repairs. The bike club was the closest thing to a bike shop in an area with more than 40,000 residents.

With Surma’s help, the group now plans to grow beyond their garage base and open a bike shop to fill a clear need for bike service and sales in Southwest Detroit. The shop will give neighborhood youth opportunities to earn money, and give them the resources and skills to become productive, self-determined adults.

The garage currently has some tools, a workbench, a meager parts inventory and used bikes in various stages of reconstruction. The Southwest Rides planning committee, which comprises five adults and young people from the bike club, have identified the necessary inventory and located a prospective site to use as their bike shop space.

“We know what we need and how to procure it,” Surma said. “Now we just need to raise the money to make it a reality, and I believe we’ll make it happen.”

The goal is for Southwest Rides to be an independent, youth-run cooperative within five years.

Southwest Rides is hosting a bike drive on August 14, where bikes (working and non-working) can be donated to the bike club at All Saints Neighborhood Center, 8300 Longworth, Detroit, Michigan.

The goal is for Southwest Rides to be an independent, youth-run cooperative within five years. Southwest Rides is always looking for volunteers, donations and new or used bikes. For more information, please visit their Facebook page Southwest Rides: Bikes and Boards or call 248-345-6535.