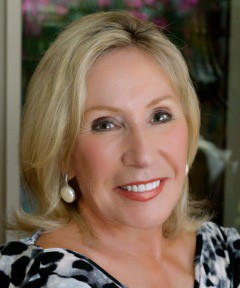 Sharrell Blakeley is hardworking, determined, and passionate about healthy families. Her work ethic was established early on as one of five children where she was raised by warm and loving parents, who always made room for friends in need.

Blakeley was a real go-getter in high school—graduating as salutatorian— who also had an impressive list of extracurricular activities ranging from cheerleader to class president.

After graduation, Blakeley worked for two years as a secretary to earn money for college. She entered the University of Michigan, where she carried a full class load and worked several part-time jobs as she pursued a bachelor’s degree in sociology.

“I’d attend classes until noon, work as a typist at the UM Neuropsychiatric Institute in the afternoon, and then race to Weber’s at the end of the day for the evening hostess shift,” Blakeley reminisced. “During slow times I’d study with a pen light!”

She’s incredibly grateful to the social workers at the Neuropsychiatric Institute, who encouraged her to earn a master’s degree in social work, and that’s exactly what she did, graduating from the UM School of Social Work in 1968.

Blakeley began her career as a clinical social worker at the Center for Forensic Psychiatry in Ypsilanti before accepting a position as a child welfare worker with the Department of Social Services (DSS) in San Francisco in 1970.

“There were 650 applicants for six DSS positions and at the end of my interview I asked them when they would be calling me to offer the position,” Blakeley said. “I really wanted that job, and they called me at 8:01 the next morning…. I’ve never done direct service since.”

In two short years, Blakeley helped develop a comprehensive child abuse treatment program at Children’s Hospital in Oakland, where she wrote a grant to create the Children’s Trauma Center; her success thrust her into a leadership role as director of the center.

“I gained valuable administrative experience, which transitioned me from social worker to public policy maker,” Blakeley said. When I left the program in 1977, the budget had been tripled, and child abuse and neglect training modules had been funded by the National Institute of Mental Health.”

Blakeley was well on her way to blazing a trail of many firsts. In 1977, the newly elected Governor Edmund G. Brown, Jr. requested she launch the Office of Child Abuse Prevention, which was newly created by State Legislature. As the first director, Blakeley laid the foundation for what is now a multi-million-dollar office, which funds innovative treatment, training, and research projects throughout California.

She went on to spearhead public policy reform, first as Chief of the Family and Children’s Policy Bureau, and then as Chief of the Adoptions Bureau for the California Department of Social Services.

People listened to me because I was able to explain a situation in a way that people would get it. I got that in my training as an MSW.

When asked about her greatest accomplishment, she’s happy to talk about leading child welfare reform in 1980.

“Before the Adoption Assistance and Child Welfare Act of 1980, a child could be placed into foster care, and stay there until they were 18 years old,” Blakeley explained. “We made major changes with timeframes, which are all monitored by the juvenile court and social workers.”

Blakeley believes she was able to make great strides in child welfare reform because of the training she received as an MSW.

“People listened to me because I was able to explain a situation in a way that people would get it,” Blakeley said. “I got that in my training as an MSW. I had the very best professors at UM, who were profoundly and succinctly astute at seeing the big picture, and taught me to do the same.”

Blakeley’s remarkable accomplishments continued, and in 1994 she launched the Pregnant and Parenting Women’s Alternative Sentencing Program for the California Department of Corrections. The program, known as Family Foundations, provides treatment for substance-abusing, pregnant, and/or parenting women with children six years old or younger. This innovative program resulted in reduced recidivism, productive citizens, and improved child functioning.

Even though Blakeley retired in 2010, she certainly doesn’t have any plans to slow down. She’s currently a Community Services Commissioner for the City of La Quinta, and a consultant on child welfare and female offender issues. She also serves as an expert witness on litigated child abuse cases.

After reading Larry Metzger’s, MSW ’70, donor profile in the last issue of Ongoing magazine, and reflecting on her prolific career with child welfare reform, she was prompted to make a bequest that will establish an endowed fund to provide support for MSW students interested in child welfare or a related field.

“It was the obvious thing to do,” Blakeley said. “So much was given to me during my time at UM, which prepared me for great accomplishments throughout my career…and now it’s time for me to give back.”