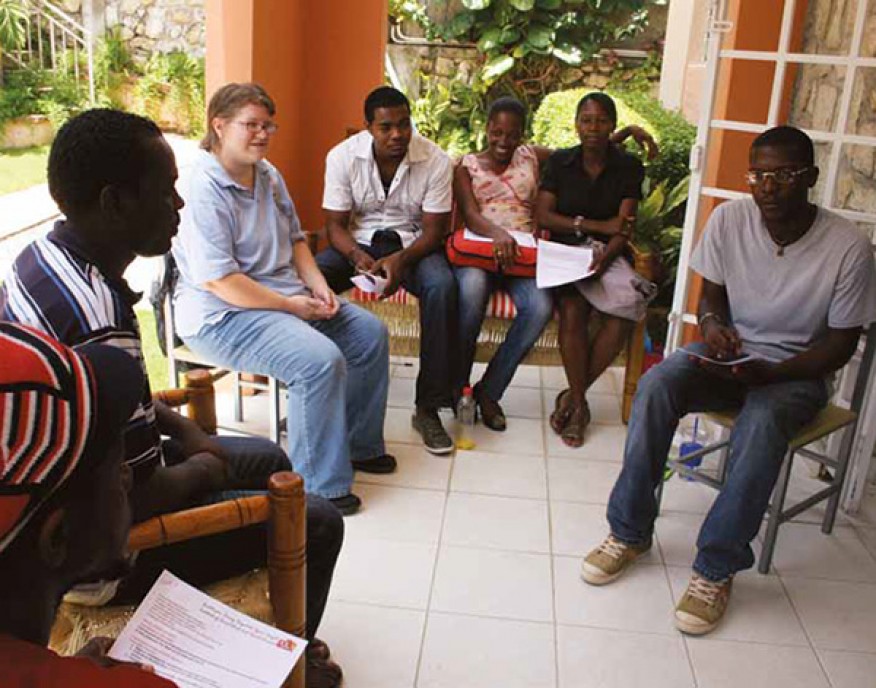 Athena Kolbe has a very full plate in not one, but two countries, as she finishes her doctoral program in social work and political science, at the same time she is acting director of an independent university program in Haiti.

“I liked exposing the truth and influencing debate,” Kolbe said. “But I knew it was time for a career change after ten years in journalism. I had a nearmiss in the Middle East and my editors kept telling me not to be so personally involved in the stories I was covering.”

She returned to the United States, where she completed her MSW at Wayne State University and began some groundbreaking research, surveying households to look at health and mental health outcomes in Haiti.

At that point, Kolbe knew she wanted to pursue her PhD where she could continue research in underserved areas, and have a positive impact.

“Of all the doctoral programs that accepted me UM was the most excited about my research. They were really interested in building relationships and the faculty, staff, and students were incredibly nice,” Kolbe said. “Combine all of that with the School’s reputation, and it was an easy choice for me.”

Kolbe spends the majority of her time in Haiti as director of Social Work Education at Enstiti Travay Sosyal ak Syans Sosyal (ETS), a university associated with SOPUDEP (Society of Providence United for the Economic Development of Pétion-Ville), a Haitianfounded and -run grassroots social development organization. The ETS mission is to teach students to work with vulnerable and underserved populations and prepares them to fulfill research, leadership, and policy-shaping positions in both foreign and national organizations working with these populations. The students complete a curriculum similar to that offered at UM which has been adapted to a Haitian context; UM doctoral students and graduates form a core group of instructors at the school. In addition to becoming fluent in English and French, each student completes a 1700-hour social work field placement and a publishable research project.

ETS grew out of Kolbe’s collaboration with Haitian social workers in conducting research and interventions on crime and public health in Haiti after the 2004 coup. Focus groups with Haitian social workers, who have little or no formal social work education, revealed that most social services in Haiti are provided by foreigners and outside NGOs who often provide services based on funding streams and foreign priorities rather than on the needs of ordinary Haitians.

“We started a BSW and MSW program with SOPUDEP to raise up a group of leaders who can change the provision of services in Haiti so that social work is indigenously led,” Kolbe explained.

The first class will graduate in 2015.

“In Haiti right now the government is unable to take responsibility for social services, for mental health, or for elder care, and I hope our students will be the catalyst for the change.”

Teaching in Haiti has some stark contrasts to teaching at UM. Haitian students sit at long wooden benches in a concrete room with filtered light and chalkboards.

“In Haiti, we can’t rely on PowerPoint to teach. The students do have access to a computer lab, which is powered by gas-run generators,” Kolbe said. “It’s more challenging to teach in this environment, but it’s also rewarding to see that the students are working toward the same goals as Michigan Social Work students, they want the tools and skills to improve their community. They want to help people overcome difficulties with mental health or poverty, and they want to improve the everyday lives of ordinary Haitians.”

Kolbe expects to complete her PhD next year when she hopes to continue her research and work in academia.