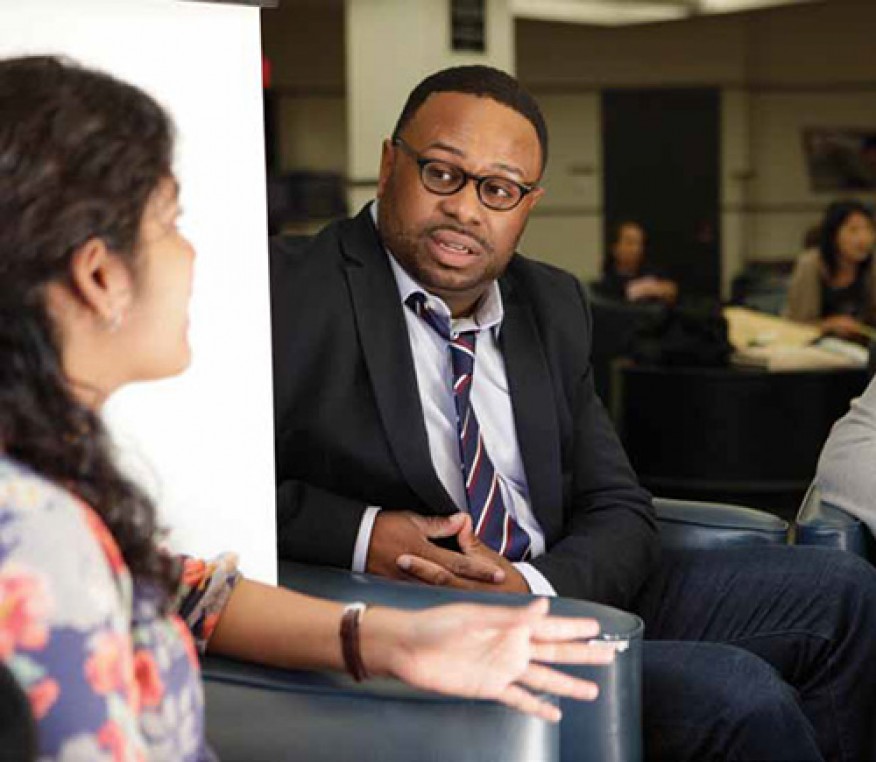 Assistant Professor Desmond Patton joins the UM SSW faculty as a recent graduate of the University of Chicago. He isn’t a newcomer to Ann Arbor; he earned his MSW from UM in 2006 and was an Olivia P. Maynard Fellow.

“Coming back as an alum is surreal,” Desmond beamed. “My office is right next to one of my favorite profs…this is where it all started for me…it’s my academic home.”

To be protected, these kids couldn’t avoid the gang members because they needed to be known as someone who could be trusted, and they could never act like they were better than anyone else. They really straddled two worlds.

Patton’s research is broadly focused on urban African-American male development and identity. He is specifically interested in the mechanisms and processes underlying how African-American adolescent males respond to community violence exposure and its impact on masculinity, friendship, and schooling.

“I observed students’ behavior in their classrooms and the primary factor related to how they got to school…how they navigated the gangs in their area,” Patton explained. “There is a lot of mental mapping of space, time, and people going on for these young men…they knew exactly where to go and when to go there.”

“What’s clear is that these young men have amazing soft skills. The students I worked with look like the gang members on the corner but they don’t act like them. They have to be bi-cultural.”

Patton explained the survival strategy for the young men he studied in North Lawndale, a primarily AfricanAmerican neighborhood on the west side of Chicago.

“To be protected, these kids couldn’t avoid the gang members because they needed to be known as someone who could be trusted, and they could never act like they were better than anyone else. They really straddled two worlds.”

As a qualitative researcher, Patton has an interest in narrative and case study based approaches to unpacking the lived experiences of urban AfricanAmerican males. He will continue his research in Flint and metropolitan Detroit, as he focuses on family and the school environment of his cohort. He also will teach community organizing methods during the current academic year.