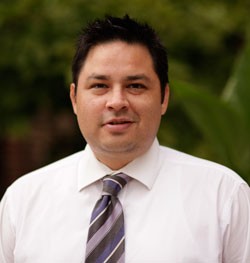 David Cordova joins the SSW faculty from his post-doctoral work at the University of Miami (Florida) where he worked with adolescents and their families to prevent and reduce HIV risk behaviors, including substance abuse and unprotected sex.

“I’m particularly interested in prevention within the context of the family,” Cordova said. “Improving family function has been shown to have an impact on adolescent behavior. But not all interventions affect everyone in the same way.”

The emphasis on, and improvement with family functioning is hypothesized to make changes in adolescent behavior and consequently make good choices.

His research focuses on Latino health inequities, particularly as it relates to the prevention of substance use and HIV in adolescents. Most recently, Cordova received an early career development award from the Centers for Disease Control and Prevention to develop and test the efficacy of a family-based, drug abuse and HIV preventive intervention to be delivered via the Internet.

According to Cordova, the intervention involves a lot of role-playing where parents are able to take what they learn and apply it to their family context. Eight of the sessions are targeted to parents and four involve the entire family. Family functioning is the mediator, or pathway, through which change in adolescent behavior occurs.

“The emphasis on, and improvement with, family functioning is hypothesized to make changes in adolescent behavior and consequently make good choices.”

Cordova is looking forward to building on the CDC grant by building a technology-based preventive intervention. He is interested in using communitybased participatory research, as well as both qualitative and longitudinal methodologies, to work toward narrowing and ultimately eliminating health inequities in adolescent populations. He’s particularly interested in building relationships in Southwest Detroit as he continues his research.

We welcome the Cordova family as they transition to their new home in Ann Arbor!