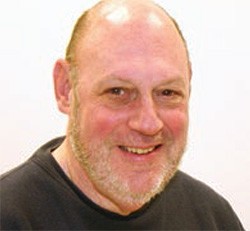 Th is significant donor to the University of Michigan School of Social Work engages in a mind-boggling array of teaching activities in his third career - the one he owes to U-M SSW. He teaches full-time at the Richard Stockton College in Galloway, NJ and is an adjunct professor at New York University, Hunter College, State University of New York-Stony Brook, and Long Island University-Brooklyn. In addition, he is a doctoral candidate in public health at City University of New York (CUNY).

When he gets this doctorate, it will add to an impressive list of degrees. "In addition to my University of Michigan MSW, I currently hold a law degree from New York University; a master's degree in sociology from the New School for Social Research; and a PhD in social work and a master's degree in public health, both from CUNY," he said.

Yet he still finds time to keep up with his partner and co-donor Susan Havens Lang; his son Chris, who is an aspiring writer and film critic; his two-year-old granddaughter Natalie; and of course, University of Michigan football. He is also a Pittsburgh Steelers fan, having grown up in Pennsylvania.

This school has great professors and a supportive environment that I have learned to replicate in my teaching philosophy and in how I live generally.

Not everyone can claim three impressive careers, but Cabin can. In his first career, he worked with the New York City government and the state government, too, including 10 years on the staff of former governor Mario Cuomo. In his second career, he was an executive, a consultant, and a researcher in the field of home care and hospice. Downsizing impacts people at all levels, however, and in midlife, Cabin found himself at loose ends, seeking a new direction. Michigan provided the change he was looking for.

The University of Michigan gave Cabin more than just a degree that enabled him to move into academia. "Th is school has great professors and a supportive environment that I have learned to replicate in my teaching philosophy and in how I live generally," he said.

Cabin earned his MSW in 2004. When asked why he chooses to donate to the school, he said, "U-M SSW was pivotal in turning my life around. After being downsized out of my job, I was unemployed for a year and looking for a way to reconfigure myself. U-M SSW allowed me to enter academia as a means to teach, do research, and earn a living, all at the same time. Also, I believe that you should give back when you have benefited from what someone else, or an organization, has given you."

He and his long-time partner Susan first established an expendable field placement grant and then, over this past summer, they decided to endow it. Cabin has also been providing $5000 for the last few years as a matching incentive for the Alumni Board of Governors Fund.

"I want students to broaden their world view by being able to do work nationally and internationally while at U-M SSW," he said. "I also want to help limit the burden students feel when they are simultaneously doing field work, taking courses, and maintaining a personal life."

The Cabin Havers Grant Fund provides field stipends to support MSW students with significant financial need and field placements in southeast Michigan. It is named in honor of two fathers - Vern Havens and Saul Cabin. Both men were born poor, but believed that practicing a strong work ethic and treating people fairly were the keys to a successful and meaningful life.

If he were advising a young social worker just beginning a career, Cabin would say: "Don't be rigid. Get out there and get some experience to sort out your real skills, needs, and interests. Once you do that, go for what you want with vigor."

Good advice for all, from a man who has done just that.