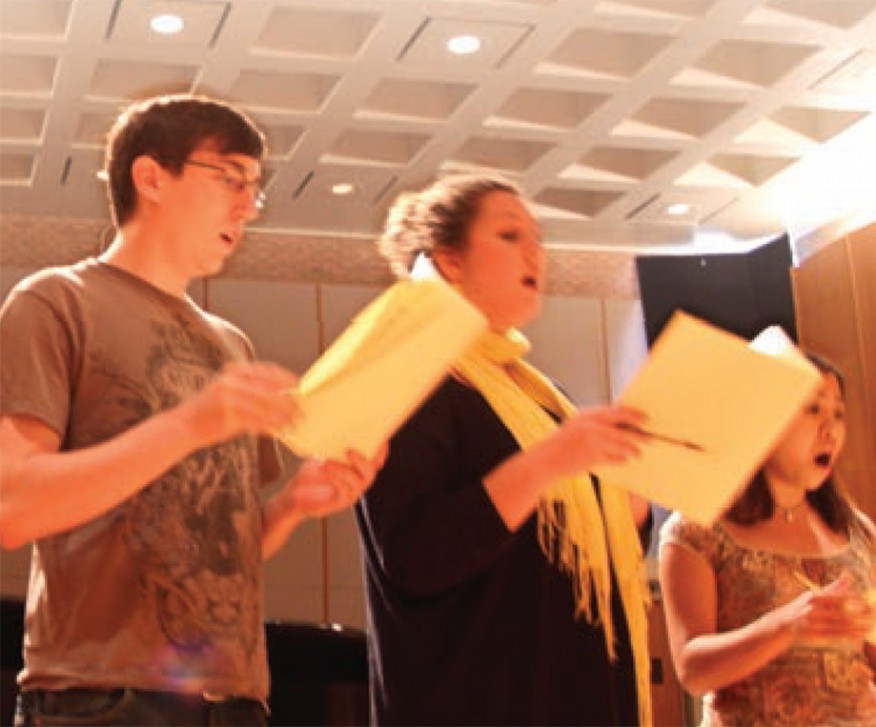 Life passions can bring together some of the most unlikely companions, and yet once they’re united, their togetherness seems like the most natural of couplings.

The anniversary theme Reach Out, Raise Hope, Change Society is the celebratory inspiration that caught the attention of composer Bruce Adolphe, a man to be celebrated in his own right, and the University of Michigan community has been enriched by the coming together of music and the message to change society

Joan Fisch, MSW ’67, a U-M alum and afi cionado of music, and more specifi cally of Adolphe’s work, suggested commissioning a piece of music to celebrate the SSW’s 90th anniversary. Joan, along with her husband Allan, who is a 1965 graduate from the College of Literature, Science and the Arts, generously provided the funds to commission the piece. Th is led to an unprecedented collaboration between SSW and a musical enterprise.

“My motivation for suggesting a commission,” explained Fisch, “is that music is one way that we express ourselves, that we share experiences with others. Music can be healing, celebratory, and can bring people together.”

Once the committee reviewed Adolphe’s work and defi ned the message of the piece, the masterful creative process became top priority for the renowned composer, who is based in New York City. Adolphe’s multifaceted career in music is obvious from the positions he holds concurrently: resident lecturer of Lincoln Center’s Chamber Music Society, founding creative director of The Learning Maestros, and comic keyboard quiz-master of National Public Radio’s weekly radio program Piano Puzzlers.

Music is not just entertainment but can also be a statement of social significance, and I hope that that’s clarified with this piece.

“I write in a very focused way, and I rearrange my life around a project,” explained Adolphe. “When a project like this comes along, it’s best for me to write in a compressed period, then I give the project some distance and come back to it with a more detached sensibility.”

Adolphe has fi ne-tuned this process for decades and has written works for many of the world’s most renowned artists including Itzhak Perlman, Yo-Yo Ma, Sylvia McNair and the Beaux Arts Trio.

His initial task was to identify text that tells the story about changing society. Th e cantata is written in ten movements, each allowing for a diff erent mood, and is derived from ten multicultural texts (poems, sayings, proverbs). SSW students and faculty were invited to submit suggestions for inclusion in the text. Fisch wanted this process to be “ground up rather than top down,” and she’s delighted that there was involvement from the SSW

“The text is the emotional outline,” Adolphe said. “It’s like a script to a show.”

The creative process continues as Adolphe develops the music. Th ere were months of composing for two to six hours each day. He conducted exploratory composing as he collected each new text, building his musical ideas one movement at a time.

“I wanted this piece to have texture,” Adolphe said. “None of the movements sound like the other.”

Within a year, Adolphe had completed the 90th anniversary cantata, always with the intent to follow the theme Reach Out, Raise Hope, Change Society.

“Music is not just entertainment,” Adolphe explained, “but can also be a statement of social signifi cance, and I hope that that’s clarified with this piece.”

Adolphe believes his cantata expands the audience with the social justice message, and reaches beyond writing a good score.

“The message of this text lifts this piece to a diff erent level,” Adolphe said.

Th e University of Michigan Chamber Choir performed Reach Out, Raise Hope, Change Society with woodwinds and percussion accompaniment on November 18, to a full house of delighted guests. An afterglow reception for all guests to celebrate the 90th anniversary was a high point for everyone.

“Th is cantata is one of the most important works I’ve done,” Adolphe said.

Marci Raver Lash is the editor of Ongoing