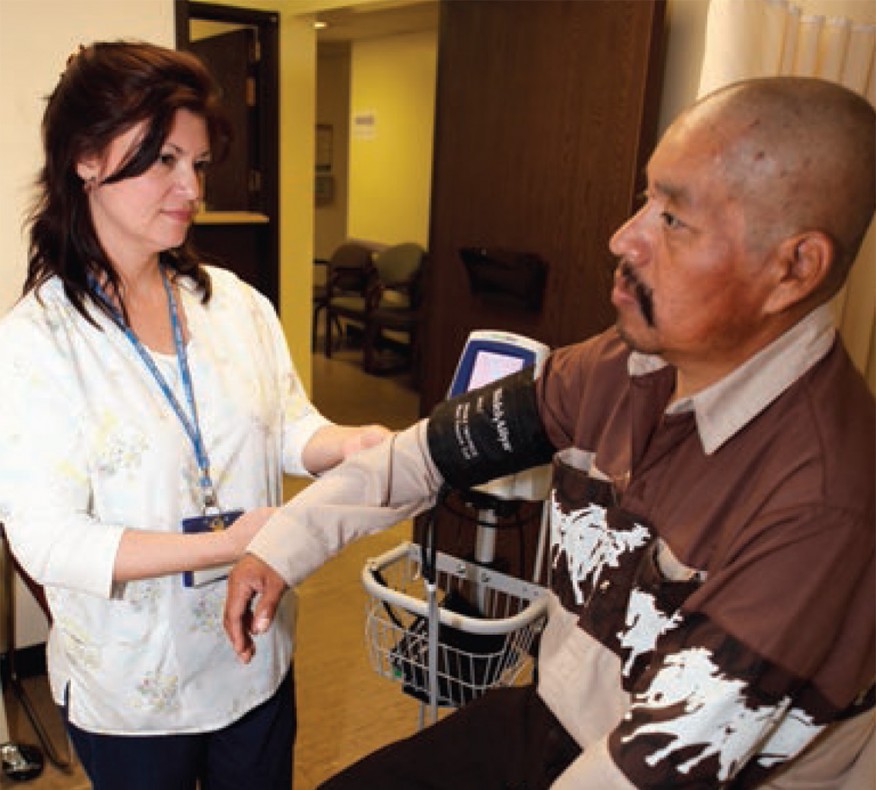 Lack of research is what kept us from proving Community Health Workers (CHWs) are benefi cial, but not anymore.“We’ve demonstrated the eff ectiveness of a community health worker with rigorous research, and it works because the intervention is culturally tailored to the people in the group,” explained Michael S. Spencer, PhD, MSSW, who led the eff orts to document the benefi ts of CHW among African American and Latino adults with type 2 diabetes.

“CHWs are defi ned as indigenous workers from the community who are trained in a specifi c area of community health,” Spencer said. “A CHW is able to successfully help with the patient’s disease because they do it with a sense of camaraderie. Th e intervention is culturally tailored, and who better to do that than someone from the same culture.”

Spencer believes working with a CHW is one approach whose time has come. Th e research used a randomized, six-month delayed control group design among 164 African American and Latino adults recruited from two health systems in Detroit. Th e study was guided by the principles of communitybased participatory research, and hemoglobin A1c level was the primary outcome measure. CHWs provided participants with diabetes education, home visits and accompanied them to a clinic visit during the six-month intervention period.

During a recent meeting of CHWs at Community Health and Social Services (CHASS) Center, Inc. in Detroit, the men and women greet each other warmly in their native language, Spanish. Th ey ask one another about their family, their work activities and upcoming classes for their patients. Each of these CHWs has been aff ected by diabetes, either in their own lives or those of their loved ones, so the connection with their patients goes beyond the sharing of their culture.

“In our culture, diabetes is a taboo, particularly among men,” said Marta Lugo Rodriguez, a family health advocate. “Th ey see a diagnosis of diabetes as a death sentence, but once they join our program and work with a CHW, the patients are amazed that they learn so much, and then they feel prepared, they feel more in charge of their diabetes.”

A big factor in the eff ectiveness of the CHW approach is legitimizing CHWs as appropriate individuals to be a part of a healthcare team, according to Spencer. Th e CHW helps do the work that a healthcare provider often does not have time to do and does so in a respectful way.

Our goal is to help them maintain their identity while educating them about their disease and increasing their access to information and resources.

Th e model of research adopted for the REACH Detroit Partnership: A Community Project of CHASS, is a partner of the Centers for Disease Control and Prevention (CDC)-funded Racial and Ethnic Approaches to Community Health (REACH) initiative, which utilizes Community Based Participatory Research (CBPR). CBPR is the chosen method because it involves the community at all levels of the process. Spencer advocates the model because he believes when the community is active in the decision-making, the community is increasingly invested in the program, and that investment leads to trusting the process and the outcome.

“The CHW instills trust because they come from the same community as patients,” Spencer explained. Th e trust begins with understanding the community and their culture, what they eat and how the families go about their day, and then the CHW teaches them to prepare the food for them and their family in a healthy way.”

Spencer goes on to say that those involved with the research project don’t tell the patients that their culture isn’t healthy. In fact, just the opposite. “As part of our relationship building, we explain to them that their ancestors come from a healthy culture and we have evidence to show that obesity and chronic health problems such as diabetes were not a problem, that’s not part of their culture.”

Spencer believes people are less healthy today due to structural issues that put people at risk, such as little or no access to fresh produce at their local grocery stores, or living in a community where people don’t feel comfortable walking or don’t have a place for daily exercise.

“Our goal isn’t to blame individuals or cultures at large for chronic illness,” emphasizes Spencer. “Our goal is to help them maintain their identity while educating them about their disease and increasing their access to information and resources.”

Th e CHWs, known as Family Health Advocates in this intervention, recruit patients who have been diagnosed with type 2 diabetes with three steps. Th e patient is contacted via letter, then they receive a follow-up phone call and are invited to an orientation to provide a general overview of the opportunity.

“Th ere are risks and benefi ts for all research,” Spencer pointed out. “In this particular study, the greatest risk is for the group of people in the control group who receive a six month delayed intervention. We’re always sensitive to the control group, and in fact this is why we chose to have all participants ultimately receive the intervention.”

Once the patient has agreed to participate, they’re randomized into one of two groups, the immediate or the delayed group. Th e CHW leaders are extensively trained community members who work as bridges between their ethnic, cultural or geographic communities and health care providers. Th e CHWs working with the Detroit groups were trained to promote healthy eating, activity and exercise, appropriate medication usage, daily glucose monitoring and stress management.

CHWs teach their patients how to advocate for themselves; the intervention even includes managing the process of requesting a translator, if one is needed, when scheduling doctor appointments.

Sometimes I’ll see a patient at the grocery store and they’ll ask me the best way to cook something,” Rodriguez said. “Our job as a community health worker goes beyond the classes we teach.

The program involves one-on-one classes, and group classes. Rodriguez said the cooking and stress management classes are the most popular, but there are plenty of classes that are eagerly attended for exercise too.

John Barber, the exercise instructor for the Wednesday morning classes, likes to use Motown music for his class. “Motown music has a good beat,” Barber smiles. “Th ese people are so dedicated, and I want to keep them going.”

Barber puts them through an hour-long workout ranging from cardio with a chair and weights, to dexterity exercises to keep them loose and limber.

Josefina Zaragoza, 76, has lived in the community for 45 years, and she’s a shining example in the fi tness class. She’s happy while she’s following along with the exercises and when the class comes to an end, she’s ready to head for the door.

“I like coming to the class every week, it keeps me in shape, and now I’m walking much better, I even mow my lawn,” Zaragoza smiles. “I’m sorry I can’t talk longer, my children are picking me up, we go out to eat every week.”

“We’re working with a culture that takes a lot of pride in their family, so we focus on how the patient can manage their diabetes and still keep up with their family responsibilities, Rodriguez explains. “Th at means we do some meetings by phone because some people won’t get childcare or may not have transportation. We understand that this culture is family focused and we work that into our program.”

When patients complete the program, the entire family is invited to a celebration.

“Everyone in the community benefi ts from CHWs,” Rodriguez smiles. “We become close with the patient and their families and I feel very committed, even protective of them.”

“Sometimes I’ll see a patient at the grocery store and they’ll ask me the best way to cook something,” Rodriguez said. “Our job as a community health worker goes beyond the classes we teach.”

Spencer said the study “Eff ectiveness of a Community Health Worker Intervention Among African American and Latino Adults with Type 2 Diabetes: A Randomized Controlled Trial,” published in the American Journal of Public Health (June 16, 2011) contributes to the growing evidence for the eff ectiveness of community health workers.

“This is doable and preferable and eff ective,” Spencer nods. “And now we’re working on proving it’s cost eff ectiveness.”

Spencer will present the fi ndings from his current grant funded by the National Institute of Diabetes and Digestive and Kidney Diseases (NIDDK) regarding cost benefi ts in 2013.