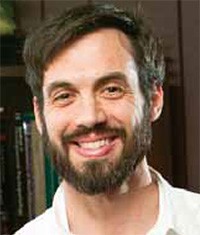 “Even if I had to find work as a cop, I wasn’t leaving the Bay Area,” says Luke Bergmann of life after his University of California, Berkeley post-doc. Then the call came from a Detroit acquaintance. “‘We need you to take this job,’ he told me. And as cliché as it sounds, I couldn’t say no. I took so much from Detroit, and [the job] was an opportunity to give something back to the city.” So he traded the pink jasmine and a tenure-track job offer for a position with the Detroit Department of Health and Wellness Promotion.

Not a bad trade, by Bergmann’s reckoning. The city’s west-side Dexter neighborhood—its residents and its places—shared life with him for the better part of three years as he completed dissertation fieldwork that explored the significance of social spaces and spatial categories to young African Americans in the illicit drug trade. The dissertation, which grew out of relationships Bergmann formed during fieldwork at the Wayne County Juvenile Detention Facility, received the University of Michigan’s 2004 Best Dissertation Award.

Both the relationships that developed during the fieldwork and the life of the revised dissertation— published in February 2009 by nonprofit New Press as Getting Ghost: Two Young Lives and the Struggle for the Soul of an American City—have shaped Bergmann irrevocably. He hadn’t expected to live, essentially, as a young black drug dealer while a white twentysomething graduate student. “Some of my closest friendships in the world now are with people from my work.” He is a friend, a godfather, a confidant; he grieves their deaths, attends their baby showers, and shares their hopes for the future.

As for the book, its publication and reception have been “a surreal experience. I wrote an unorthodox dissertation that didn’t adhere to social science conventions.” Rather than reading urban sociology or anthropology while writing, Bergmann immersed himself instead in Faulkner and Baldwin—“people who write about racial politics in a sophisticated, beautiful way.” When Bergmann elected to publish the revision as a trade book, he encountered further complexities. Could he craft a narrative that spoke to both academy and lay reader?

Apparently so. Getting Ghost—while not storming the New York Times bestseller list—is generating serious conversation among academics and lay audiences. Professors from Columbia to the University of California are adding the book to their required reading lists. And Bergmann has appeared on countless radio programs, from NPR’s Marketplace to regional and local stations, and Getting Ghost has earned favorable reviews in venues ranging from personal blogs to the Wall Street Journal.

How, though, would his friends, those who shared their lives with him, receive Getting Ghost? “Everyone in the neighborhood in the dope game knew what I was doing; while many became like family, there was always some lingering wariness about me,” he explains. “I was nervous about those I wrote most about. What would they think about my portrayal?”

Bergmann received the feedback he had been hoping for in summer 2009, when introducing a documentary film crew to the young adults he had written about in Getting Ghost. “There were maybe fifteen people on the porch, talking with the film crew; they passed the book around as they talked. I showed them snippets while writing, but never the whole thing. And they liked it. Like I had given them a forum.”

His work also prepared him for subtle challenges of his current position as director of Resource and Research Development in the health department’s Bureau of Substance Abuse Prevention, Treatment, and Recovery. Detroit city government “can be delicate, and the ways I need to negotiate my whiteness are complex. The fieldwork helps me navigate those waters.”

Catch Bergmann on any given weekday and he is kind, but strained, mobbed by meetings, phone calls, crises, and politics. It’s okay, he says. These comprise just one aspect of his dream job—one that permits him to create rather than just observe, to be part of building the city that has given him so much.