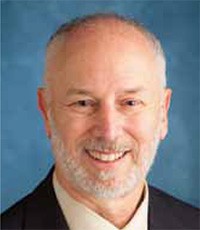 Joining the U-M School of Social Work last fall as CEO-in-residence through a McGregor Fund fellowship seems a logical step for Tony Rothschild. He has kept in contact with the School in several ways since graduating—serving on the School’s alumni board in the 1980s, attending continuing education courses at the School several times over the years, and meeting with community practice students to share his experiences.

Having grown up in Los Angeles, “a product of the anti-war struggle,” Tony credits the Vietnam War with his coming to Michigan and working in crisis intervention. The year he graduated from the University of California, Irvine, was the first year of the draft lottery.

“I didn’t want to avoid service; I wanted to provide service,” he says.

So he signed up with Volunteers in Service to America (VISTA), and he and his new bride were sent to Detroit. His VISTA experience initiated his interest in social work, and he majored in community practice at the U-M SSW.

After graduating, Tony worked at a community mental health center, educating the community about mental illness. He then worked for a neighborhood service organization in northwest Detroit, helping business associations and block clubs to organize and change their community.

Tony served as special assistant to U.S. Congressman George W. Crockett Jr. from 1980 to 1990. He dealt with constituent service, unclogging bureaucracy and addressing problems. Four times he accompanied a delegation to Guatemala and El Salvador, which were embroiled in civil war and difficult elections.

Occasionally Tony would need to call U.S. Congressman John Conyers’ office, and his main point person was Rosa Parks. Once Conyers’ office challenged Crockett’s office to a bowling tournament. “It was Rosa Parks’ first time bowling and Conyers’ office was very competitive, so they wouldn’t let Rosa bowl on their team,” he remembers. “So my daughter (age 11), who had come with me, and Rosa played in the lane next to us!”

When Tony was first hired as executive director of Common Ground, an Oakland County-based nonprofit that provides crisis intervention services, the board was concerned that he would be bored after working in a representative’s office. The evening of the Royal Oak post office shooting, Tony was called in to see the crime scene before giving the post office staff a debriefing the following day. Seeing the blood on desk and floor, with yellow tape cordoning off the area, he thought to himself, “No, this isn’t boring!”

As CEO, Tony helped build Common Ground from 20 staff members and a $750,000 budget in 1990 to 200 people and a $11.5 million budget. Among other services, the organization determines eligibility for the public mental health system and provides a 24- hour crisis telephone hotline, psychiatric assessment for hospitalization, short-term residential psychiatric care, counseling for youths and their families, shortterm housing for runaway or homeless youth, a suicide survivor group, and a homicide survivor group.

Tony helps to manage the strategic plan. “I am engaged in the community and looking for new opportunities at every turn,” he says. “What attracted me at first to this job was learning what needs are not being met in the community.”

Tony is one of three CEOs selected by the McGregor Fund to be the first Eugene A. Miller Fellows, earning a 15-month sabbatical that he designed himself. At the U-M SSW he is teaching courses and has been a special speaker in classes.

“Tony made a magnificent start as our first visiting executive,” declares Professor John Tropman, “and he will present a reflective brown bag in the winter term. The School hopes to extend this beginning to a program involving senior practitioners of all methods.”

Tony’s sabbatical also includes attending a one-week residential program at Harvard University, where he will learn more about board governance, and attending the International Initiative for Mental Health Leadership conference in Killarney, Ireland.

He also plans to take a four-week Spanish immersion course in Guatemala in January 2011 as well as take vacation time in Hawaii to celebrate his fortieth wedding anniversary—and forty years in the Detroit area.