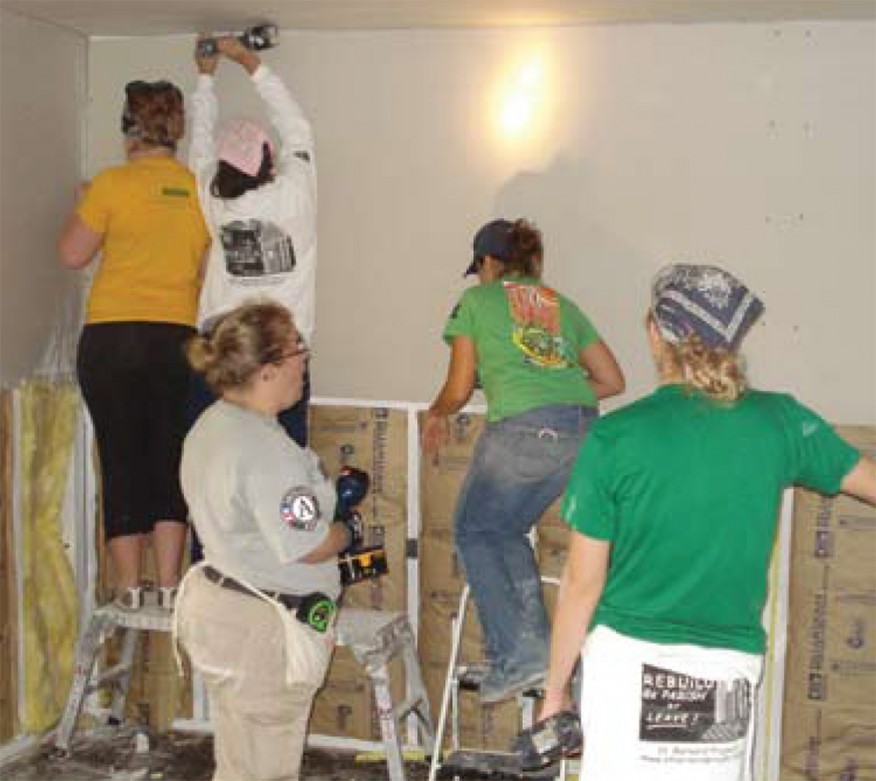 The SSW Disaster Response Group was formed in 2005 in reaction to the devastation caused by Hurricane Katrina and the social injustices revealed during inadequate federal and state relief efforts. The purpose of this group is to raise consciousness and improve the preparedness and response of individual citizens to disasters of all types. It has been a tradition of the group to go to New Orleans over spring break to help with the rebuilding process; even though the disaster occurred several years ago, New Orleans is a place that can still benefit from rebuilding efforts.

Our group of eleven social work students left for New Orleans via car on February 21, arriving there the following afternoon. After settling into the Hands­On New Orleans bunkhouse, an agency that both coordinates and provides lodging and amenities for volunteers serving the New Orleans area, we took the time to decorate masks in honor of Mardi Gras.

On Monday we volunteered at St. Margaret’s Nursing Home. We helped decorate and serve food at the nursing home’s annual Mardi Gras party. This was of particular interest to the geriatric social worker on the trip!

Monday night we watched the Orpheus Parade. Most of the city shut down on Tuesday, so we decided to use the day to take in Mardi Gras. We watched the Zulu parade, which was celebrating its 100th anniversary. We also wandered around the French Quarter and sampled beignets, French doughnuts popular on Fat Tuesday.

We spent Wednesday volunteering with the O.C. Haley Renovation Project. This project is funded through Main Street: Revitalizing Your Commercial District, a national organization that benefits commercial districts across the country by combining historical preservation with economic development. Half of our group helped with a community garden involved in the project, and the other half helped clean used bricks so that they could be sold for a fundraising effort.

Thursday and Friday we spent with Saint Bernard’s Project, an organization that helps low income families, elderly, and disabled residents of Saint Bernard Parish rebuild their homes. Our group helped to paint two houses as well as install flooring and baseboards.

During our volunteer orientation at Saint Bernard’s, our site leader shared with us how the New Orleans volunteers have been a vital part of the revitalization of the city. According to the coordinator, many New Orleans residents feel abandoned by the government due to their slow reaction to the storm. Despite this, New Orleans residents are strongly patriotic due to the large number of civilian volunteers throughout the country who continue to help with the rebuilding efforts.

We volunteered at a New Orleans Hornets basketball game on Thursday night, passing out programs to the fans. The Hornets were playing the Detroit Pistons that night; unfortunately, the Pistons lost.

We left on Friday after a delicious Cajun meal at Mandina’s restaurant in Mid-City, near the HandsOn New Orleans bunkhouse.

As students we gained hands-on supplementary social work experience on this trip. Issues pertaining to management, policy, community organizing, and interpersonal practice were all touched upon while we participated in volunteer projects. I found this trip to be an important one to take as both an American and a social worker. The rebuilding process occurring in New Orleans is a great example of how fellow citizens can serve and provide hope for one another after a terrible disaster.