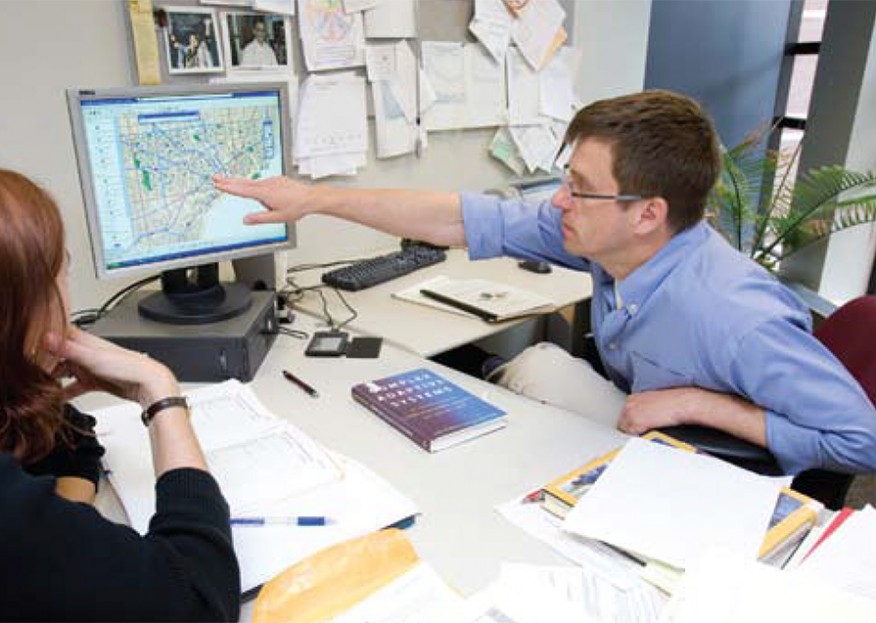 GIS: A Tool for Helping Children in Neighborhoods

School of Social Work faculty, represented by Associate Professor Andy Grogan-Kaylor and Professor Larry Gant, are part of an emerging scholarly movement that seeks to understand how neighborhood variables affect children. Through research, practice, and teaching, they encourage researchers and practitioners to use geographic information systems (GIS) technology to visualize neighborhood attributes and to shape evidence-based interventions that strengthen children’s neighborhoods.

Geographic information systems—“computer systems capable of capturing, storing, analyzing, and displaying . . . data identified according to location”—were pioneered in the 1960s and have been commercially available since the 1980s. Researchers find them particularly helpful because they “relate different [kinds of] information in a spatial context and are able to reach a conclusion about this relationship.”2 However, it is only in the last decade that GIS has been widely used by social researchers to map and analyze neighborhood attributes gleaned from census data and other community sources.

Social researchers’ adoption of GIS technology has been encouraged by a recent shift in perspective. Moving away from a sole focus on the individual that was popular in the mid-twentieth century, much social work research has returned to an “ecological framework” that takes into account how environment and spatial relationships shape people and their development.3 This recent conceptual return to a more contextual perspective has made emerging GIS applications quite valuable among social workers striving to understand children and their experience within the framework of their neighborhoods.

Practically speaking, this means that SSW faculty like Grogan-Kaylor and Gant are exploring not just children and their individual behaviors and outcomes, but also the factors at work within children’s environments—their neighborhoods, families, and school circumstances—that may influence or contribute to their success and well-being.

…78 percent of all licensed social workers provide services to clients age 21 or younger, regardless of the practice setting or focus. More than half of these social workers carry caseloads that are more than 50 percent children and/ or adolescents.

Grogan-Kaylor, with research expertise in children’s well-being and an interest in using GIS technology to enhance the practice of social work, combined the two when he joined the SSW faculty and the GIS group4 convened by the late Professor Carol Mowbray. “The shift toward neighborhood perspectives, access to more reliable data, and the powerful visual tool of GIS were all there—but we hadn’t yet put them together. We [the GIS group] saw an opportunity to contribute something to the field.” And contribute they have.

In 2007 Grogan-Kaylor, together with the GIS group, published a forward-thinking conceptual article titled “Neighborhood Research from a Spatially Oriented Strengths Perspective” in the Journal of Community Psychology. The article, researched and written from the “strengths perspective” championed by Professor Mowbray, explores GIS as a tool for visualizing neighborhood information and discusses how a neighborhood’s strengths and deficits might contribute to outcomes for children and families.

“GIS helped put a picture to the statistical story that we gleaned from the research,” explains GroganKaylor. “Of course it was possible to simply list all the data and statistics we collected, but that wouldn’t be nearly as powerful as the pictures. We used GIS to overlay aerial photos, street grids, parks, and schools to visualize where these things are actually located in proximity to one another. For us, it produced a new level of awareness about what is actually happening in neighborhoods.”

“When we looked at different factors within the neighborhood—peer culture, safety, and satisfaction,” GroganKaylor explains, “we discovered that the factor most important in promoting positive school outcomes in our data is neighborhood safety.” This insight led him to conclude that efforts to “just build the community in general” might produce insufficient results.

“It’s important to consider each aspect of each neighborhood factor. Once you determine which are the most salient or have the most effect on the life of a community, then it may be possible to develop effective program strategies.” Simply put, specific targets are related to specific outcomes. “This multi-level approach to research,” Grogan-Kaylor concludes, “helps us to become evidence-based practitioners, rather than just aspiring to or hoping for change.”

For more than a decade, Professor Larry Gant has been using GIS to help him understand children’s experience in urban communities and to promote neighborhood dialogue that leads to community-level interventions. His current focus, the SSW partnership with the Skillman Foundation’s Good Neighborhoods Initiative (GNI),5 draws on his long experience with Detroit’s neighborhoods and dynamics.

“Using maps, data, and consultants from Wayne State University’s urban planning program,” Gant explains, “a team of Skillman Foundation staff, administration, and an advisory group used GIS to build maps composed primarily, though not exclusively, of census data. This tool enabled the foundation program to take a neighborhood-by-neighborhood view of the city, helping us to determine that 30 percent of Detroit children live in six of fifty-four neighborhoods, with about half of that 30 percent under the poverty line.”

The data entered into the GIS also permitted Gant and fellow researchers to see levels and patterns of in- and out-migration in these neighborhoods over forty years and provided clues regarding possible reasons for migration. (Several of the GNI neighborhoods are located near the periphery of the city, bordering outlying areas with promising jobs, schools, and community resources.)

“Also mapped were community institutions— schools, parks, recreation centers—and this allowed people to visualize just how many resources and opportunities were present in neighborhoods selected for GNI participation.” Since Skillman and its partners implemented this approach, Gant has learned of more than five additional neighborhood initiatives that have elected to shape their programs using similar tactics.

Gant’s experience with the power of mapping to analyze information and to inform practice ranges beyond the Good Neighborhoods Initiative. “Not too long ago, the Kellogg Youth Initiative Program funded a three-year collaborative project between University of Michigan-Dearborn’s Academic Support and Outreach Services and Northern High School to work intensively with three cohorts (forty-five per cohort) of entering ninth graders. The purpose was to determine whether university partnerships with student organizations would help high school students increase their GPAs and standardized test scores to a competitive college-entrance level.”

The effort benefitted many of the 135 participating students, but others lagged behind. When he noticed the variation in grades, Gant wondered if they might be influenced by a neighborhood effect. The students’ teachers explained that students who are absent and tardy were less likely to succeed, but many of them lived far from school or served as de facto parents for their siblings.

“I geocoded [assigned geographic coordinates expressed as latitude-longitude] the addresses of the students in the program and discovered that, while distance was a partial explanation, other factors seemed to be at work.” Gant observed that some students were clustered within several neighborhoods. The clusters were often comprised of several lower-performing students living in proximity to a high-performing student or two. “The mapping pattern gave my colleagues and me the insight to plan a targeted intervention—we recruited the highperforming students to tutor the lower-performing students, with positive results.”

Gant then turned his attention to clusters of students without high performers. Why was no one in the cluster doing well? “We pulled the census data and did drive-throughs of those neighborhoods with students,” he recalls. “And we discovered that some of the low-achieving clusters were situated in really rough neighborhoods—in huge apartment buildings with paper-thin walls, in row houses where it was difficult to block out noise.”

Gant, his colleagues, and community members developed an intervention appropriate to the circumstance: establishing quiet study spaces in the neighborhoods. The mapping results raised the level of community dialogue—not just bringing research to the community, but empowering members to participate as equals in identifying both problem and solution.

“Our social work students have a strong interest in practical skills courses,” Grogan-Kaylor says. “so we offer a series of mini-courses, like GIS training, that are concrete, skill-building opportunities for current students and practitioners.”

GIS technology sharpens the questions students can ask and, thus, the insight they glean from their research. “I’m just beginning to work with a student on the question of food deserts in Detroit,” says Grogan-Kaylor, “and GIS permits us to visualize and analyze those in a way we never could with tabular or statistical data alone.”

It sometimes feels anticlimactic to teach a very practical course, he admits. “In graduate school, you expect to wrestle with theories and world-changing ideas. But actually producing the GIS maps that agencies and communities need involves so many small details that it feels very pragmatic.” It helps to remember, though, that he is helping students to strengthen their analytical and communication skills. “When I think about it like that, even the minutiae are exciting.”

Though GIS adds tremendous value and layers of insight to neighborhood-level research and practice, both Grogan-Kaylor and Gant understand its limits. Grogan-Kaylor believes it is important to remember that, rather than neighborhoods determining children’s outcomes, race and class may determine the types of neighborhoods in which families and children tend to live. Though the neighborhood influences outcomes, race and class influence the neighborhood. As he explains, “GIS correlations don’t answer every question. The larger structural issues of social stratification and inequality and all their attending problems still lurk behind neighborhood and community issues.”