Boundaries and Balance Lead to Understanding 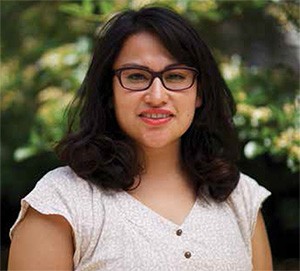 Adriana Aldana, MSW ’07, PhD ’14 grew up in southern California with plenty of sunshine and a strong sense of civic accountability.

In fact, Aldana took her responsibility of social change involvement so seriously, she pursued a doctoral degree to research and better understand the relationship between racism awareness and civic engagement among young people.

“Adolescents are at an age of exploration; it’s important to reach kids when they’re younger because this is a time in their lives when they’re most open to an inclusive way of thinking,” Aldana explained. “Our research shows thinking critically and working across differences is the key to working collaboratively, and that begins with an early understanding of those differences.”

Intergroup dialogues, similar to small groups, are an innovative approach to teaching young people civic competencies to better understand racism and inequality. With intergroup dialogues there is an effort to balance the makeup of the groups composed by gender or race.

This is the first time many of these students spend time outside of their community and this project disrupts racial segregation.

This approach gives the students a safe place to speak and think about racial differences. We establish ground rules to set expectations for cross-cultural communication, because talking about issues related to race and ethnicity can be a breeding ground for conflict. It takes a skilled facilitator to read the group dynamic, probe participants to unpack how they have been socialized to think about race relations, and keep the process headed in a productive direction.

Aldana’s research has been looking at the effects of social justice education on youth’s sociopolitical development. Her focus is the role of race-based critical pedagogy among young people and how it helps them understand their role in the world, ultimately encouraging them to become critically conscious and active citizens.

A goal of her community practice has been to empower youth to challenge racial injustice in their communities. During the past two summers Aldana managed the Youth Dialogues on Race and Ethnicity, which brings together nearly 60 high-school-aged youth from diverse ethnic and socioeconomic backgrounds from across the metropolitan Detroit region. The key criteria is that the participants represent the racial and ethnic groups that make up the various communities represented. The program includes students who have a broad range of experiences, not all athletes, not all high achieving students, and not all student council members.

“This is the first time many of these students spend time outside of their community and this project disrupts racial segregation,” Aldana said. “It brings the students together and gives them a safe place to speak; at the same time they learn about and from people who are different from themselves.”

According to Aldana, it’s difficult for people at all age levels to engage in dialogue about race and racism. High school students have less life experience than adults, but by the end of Youth Dialogues on Race and Ethnicity program, the students begin to show much more critical thinking about race, stereotypes and inequality.

During the first three weeks of the program, the students talk about their own identity in racially/ ethnically homogenous caucus groups. After the initial caucus group dialogues, the groups are paired with another caucus group to create a racially/ ethnically diverse intergroup. Participants also take a daylong bus tour of metropolitan Detroit to visit places with a significant cultural meaning; locations included a church where Martin Luther King, Jr. practiced a civil rights speech, an inner-city wall built to segregate Brewster Park, the Arab American Museum and an Asian American Art exhibition hosted at an affluent suburban public library.

Following their community tours, the intergroups discuss bigger racial issues affecting their communities, including racial segregation and educational inequality. The groups are led by undergraduate students to provide guidelines and experiential learning activities that help foster discussions within the groups.

Aldana has been responsible for teaching the curriculum to the facilitators, reviewing the notes resulting from the group discussions and providing guidance and preparation for the following dialogue session.

“This is a learning experience for everyone involved,” Aldana said. “White students learn more about their privilege and process their feelings of white guilt. Students of color learn how to voice their concerns so that they can be heard….it’s typically the marginalized group [in an intergroup setting] that tends to be more quiet, but together all of the students learn how to give voice to their own experience.”

The summer program was a successful inspiration for more than just the students in the program. The Youth Dialogues on Race and Ethnicity led to an offshoot program resulting in an adaptive high school program in Farmington Hills, Michigan for high school students in that community. The Farmington Hills program began as a youth-developed after-school program, and later became an elective course within the high school curriculum. Aldana’s dissertation focused on assessing the effects of the high school dialogue course on students’ racism awareness and civic engagement.

“I want to teach students how to build coalitions for social change because I believe there is power in numbers and it’s important to work with people who are different from you. Thinking critically and working across differences is key to social change.”

My research shows that the more aware students are of racial inequality, the more they feel it’s their responsibility to be involved in civic activities. They will make a positive difference in the world.

Aldana’s hope is that the young people participating in her program who may go into business, education and politics will grow up to be a more racially inclusive generation. She’s confident that her students are open to having difficult conversations and very capable of encouraging a collective decision making process.

“My research shows that the more aware students are of racial inequality, the more they feel it’s their responsibility to be involved in civic activities. They will make a positive difference in the world.”

Adriana Aldana successfully defended her dissertation entitled “Youth Civic Engagement: Sociopolitical Development in Schools with Lessons from and for Multicultural Education.” Her committee consisted of Barry Checkoway and Stephanie Rowley as co-chairs, along with Michael Spencer and Lorraine Gutiérrez.

Adriana has accepted a postdoctoral fellowship in Policy and Urban Planning at the University of California, Irvine.