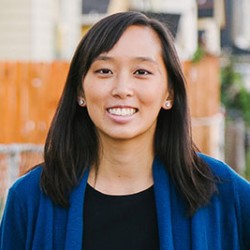 Sen. Stephanie Chang, the first Asian American woman to be elected to the Michigan Legislature, worked as a community organizer in Detroit for nearly a decade before serving two terms in the Michigan House of Representatives.

She served as state director for NextGen Climate Michigan, alumni engagement and evaluation coordinator for the Center for Progressive Leadership in Michigan, deputy director for the Campaign for Justice and as an organizer for Michigan United/One United Michigan. She also worked as a community engagement coordinator for the James and Grace Lee Boggs School and assistant to Grace Lee Boggs, an activist, writer, and speaker.

The senator also is a co-founder and past president of Asian and Pacific Islander American Vote-Michigan, and she served as a mentor with the Detroit Asian Youth Project.

In the state House, Sen. Chang led the way on air quality protection, education, criminal justice reforms, improving economic opportunities, and affordable, safe drinking water. She passed bipartisan legislation on a range of issues including female genital mutilation, nitrous oxide “whip-its”, reentry services for wrongfully convicted individuals who were exonerated, and more. She quickly earned her colleagues’ respect and was named chair of the Progressive Women’s Caucus in her second term. She also served on the leadership team for the House Democratic Caucus both terms and was a co-founder of the Asian Pacific American Legislative Caucus.

Chang earned her bachelor’s degree in psychology and master’s degrees in public policy and social work from the University of Michigan.

No courses found for Stephanie L. Chang in the Spring / Summer 2022 term.