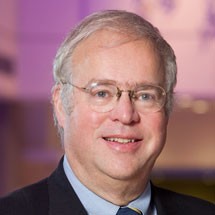 Timothy Johnson, MD, is the Bates Professor of the Diseases of Women and Children and Chair of the Department of Obstetrics and Gynecology, Professor of Women's Studies, and Research Professor in the Center for Human Growth and Development at the University of Michigan. Since assuming this position in 1993, Dr. Johnson has initiated the Women's Health Program, University of Michigan Health System, which has received designation and funding by the US Department of Health and Human Services as a National Center of Excellence in Women's Health. Dr. Johnson has served on numerous editorial boards, study sections, professional committees, societies and boards including the NIH Director's Advisory Committee on Women's Health and Research (ACWHR). He is an elected member of the Institute of Medicine of the National Academy of Science. In 2005, Dr. Johnson was awarded the Distinguished Service Award, the highest honor of the American College of Obstetricians and Gynecologists. In 2007, he was appointed Editor of the International Journal of Gynecology and Obstetrics (IJGO). He is President-elect (2007-2008) of the Association of Professors of Gynecology and Obstetrics (APGO).

Since 1985, Dr. Johnson has been actively involved in women's health projects and sustainable partnerships in Africa, Central America, and South America.

Timothy Johnson has no personal financial relationship relevant to this activity.