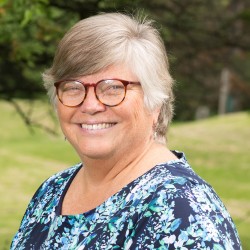 Leigh Robertson joined the Office of Field Education as a field educator/lecturer/field liaison on June 26, 2006. Previously, she worked as a clinical social worker in the medical/surgical service at the Michigan Medicine, where she also served as a field instructor.

Prior to coming to Ann Arbor in 2005, Leigh was a medical social worker at Michigan State University-Kalamazoo Center for Medical Studies for five years. While in this position, she served as field instructor for Western Michigan University (WMU), where she discovered her love for "on the job" training. Her interest in medical social work and geriatrics was sparked during her field placement at the Veterans Administration Medical Center in Battle Creek, Michigan.

Leigh was also involved in field education in Kalamazoo. At the WMU School of Social Work, she functioned as a member of the Field Advisory Committee for many years, and she worked as a field liaison and taught undergraduate social work courses.

Leigh was case manager on an Assertive Community Treatment Team for Community Mental Health in Van Buren County, where she worked with a wide variety of clients who were dual diagnosed. Leigh also was director of the Lesbian and Gay Community Center in Cleveland, Ohio, where she gained experience in community organization, management, and social activism.

Early in Leigh's social work career, she worked in five domestic violence shelters in Michigan and was actively involved with the Michigan Coalition Against Domestic Violence Lesbian Task Force, where she provided anti-homophobia and lesbian battering trainings to shelter staff. She was elected president in her last year with the coalition.